Kids Encyclopedia Facts
This page is about the district in the west of Ireland. For other uses of the term "Connemara" or "Conamara", see Connemara (disambiguation). 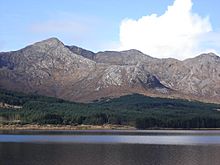 Connemara on a cloudy day. 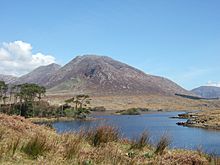 A view of Connemara, taken from the N59 road.

Connemara (Irish: Conamara;) is a cultural region in County Galway, Ireland. The most common definition of the area is that it consists of West Galway; that is to say the part of the county west of Lough Corrib, contained by Killary Harbour, Galway Bay and the Atlantic Ocean. It has a strong association with traditional Irish culture.

More restrictive definitions of Connemara define it as the historical territory of Conmhaícne Mara; just the far northwest of County Galway, bordering County Mayo. The area contains a vast part of the Connacht Irish-speaking Gaeltacht, which is a key part of the identity of the region and is the largest Gaeltacht in the country. The wider area of what is today known as Connemara was previously a sovereign kingdom known as Iar Connacht, under the kingship of the Ó Flaithbertaigh, until it became part of the Kingdom of Ireland in the 16th century.

The term Connemara is the northern area of County Galway west of Lough Corrib. It is also used to describe the Gaeltacht (Irish-speaking areas) of western County Galway, though it is argued that this too is inaccurate as some of these areas lie outside of the traditional boundary of Connemara. Some also argue that it is not correct to say that Connemara's eastern boundary ends around Barna just on the outskirts of Galway City or at Maam Cross. 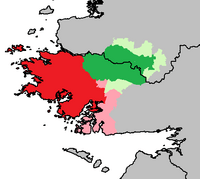 Green indicates Joyce Country, with pale green showing it at its greatest defined extent; Red indicates Connemara, extent (not including those who consider anywhere west of the Corrib to be in Connemara)

The coast of Connemara is made up of multiple penisulas.The peninsula of Iorras Ainbhtheach (sometimes corrupted to Iorras Aithneach) in the south is the largest and contains the villages of Carna and Kilkieran. The peninsula of Errismore consists of the area west of the village of Ballyconneely. Errisbeg peninsula lies to the south of the village of Roundstone. The Errislannan peninsula lies just south of the town of Clifden. The peninsulas of Kingstown, Coolacloy, Aughrus, Cleggan and Renvyle are found in the north-west of Connemara. Of the numerous islands off the coast of Connemara, Inishbofin is the largest; other islands include Omey, Inishark, High Island, Friars Island, Feenish and Maínis.

Connemara lies in the territory of Iar Connacht, "West Connacht", which is the portion of County Galway west of Lough Corrib. Connemara was traditionally divided into North Connemara and South Connemara. The mountains of the Twelve Bens and the Owenglin River, which flows into the sea at An Clochán/Clifden, marked the boundary between the two parts. Connemara is bounded on the west, south and north by the Atlantic Ocean. Connemara's land boundary with the rest of County Galway is marked by the Invermore River otherwise known as Inbhear Mór (which flows into the north of Kilkieran Bay), Loch Oorid (which lies a few miles west of Maam Cross) and the western spine of the Maumturks mountains. In the north of the mountains, the boundary meets the sea at Killary, a few miles west of Leenaun.

The Ó Cadhla (Kealy) clan were the rulers of Connemara up until the 13th century, when they were displaced by the Ó Flaithbertaighs. The latter had fled into Iar Connacht from Maigh Seola during the English invasion of Connacht in the early 13th century.

Like the Ó Cadhla clan, the Mac Conghaile (Conneely) clan was also a branch of the Conmhaicne Mara.

The main town of Connemara is Clifden. The area around the town is rich with megalithic tombs. The famous "Connemara Green marble" is found outcropping along a line between Streamstown and Lissoughter. It was a trade treasure used by the inhabitants of the prehistoric time. It continues to be of great value today. It is available in large dimensional slabs suitable for buildings as well as for smaller pieces of jewellery. It is used for the pendant for the Scouting Ireland Chief Scout's Award, the highest award in Irish Scouting.

The first transatlantic flight, piloted by Alcock and Brown, landed in Clifden in 1919.

Connemara is accessible by the Bus Éireann and City Link bus services. From 1895 to 1935 it was served by the Midland Great Western Railway branch that connected Galway City to Clifden. The railway line is still visible on the N59.[where?]

A popular alternative route is the coastal route on the R336 from Galway City. This route is also known as the Connemara Loop consisting of a 45 km drive where one can view the landscape and scenery of Connemara.

The population of Connemara is 32,000. There are between 20,000-24,000 native Irish speakers in the region making it the largest Irish-speaking Gaeltacht.

The Enumeration Districts with the most Irish speakers in all of Ireland as a percentage of the population can be seen in the South Connemara area.

Most Irish speakers are of school age (5–19 years old).

All content from Kiddle encyclopedia articles (including the article images and facts) can be freely used under Attribution-ShareAlike license, unless stated otherwise. Cite this article:
Connemara Facts for Kids. Kiddle Encyclopedia.