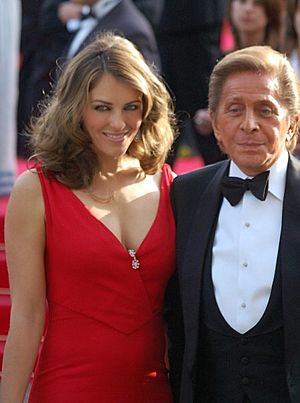 Valentino (right) and Liz Hurley at the 2007 Cannes Film Festival

Valentino Clemente Ludovico Garavani (born 11 May 1932), better known as Valentino, is an Italian fashion designer. He is the founder of the fashion house Valentino. His main lines include Valentino, Valentino Garavani, Valentino Roma, and R.E.D. Valentino. He was made a Chevalier (Knight) of the Legion of Honour in 2006 by French President Jacques Chirac. He retired in 2008. He appeared as himself in a small role in the movie The Devil Wears Prada (2006).

Valentino was born in Voghera, Lombardy. He has dated both men and women, including actress Marilù Tolo and businessman Giancarlo Giammetti.

All content from Kiddle encyclopedia articles (including the article images and facts) can be freely used under Attribution-ShareAlike license, unless stated otherwise. Cite this article:
Valentino (fashion designer) Facts for Kids. Kiddle Encyclopedia.