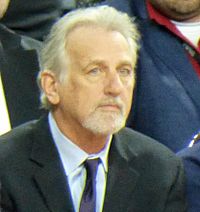 Westphal played for the National Basketball Association for the Boston Celtics, Phoenix Suns, Seattle SuperSonics and New York Knicks. He coached the Sacramento Kings and was an assistant coach for the New York Knicks and the Dallas Mavericks.

In 2019, Westphal became a member of the Naismith Memorial Basketball Hall of Fame.

In August 2020, Westphal was diagnosed with glioblastoma. He died from the disease on January 2, 2021 in Scottsdale, Arizona at the age of 70.

All content from Kiddle encyclopedia articles (including the article images and facts) can be freely used under Attribution-ShareAlike license, unless stated otherwise. Cite this article:
Paul Westphal Facts for Kids. Kiddle Encyclopedia.