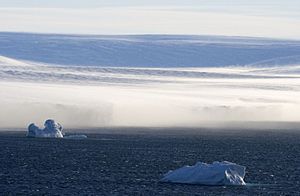 A katabatic wind is a very strong wind which blows downhill. They can be warm winds like the "föhn" wind on the north slopes of the Alps in Europe or the Chinook which blows down the Rockies in the US. They can also be very cold winds like those in Antarctica or Greenland. They are made when cold, dense air flows down from the ice cap to the coast. Sometimes these winds are called fall winds. Along the Adriatic coast, the cold katabatic wind is called the "bora", and in France it is called the "mistral".

All content from Kiddle encyclopedia articles (including the article images and facts) can be freely used under Attribution-ShareAlike license, unless stated otherwise. Cite this article:
Katabatic wind Facts for Kids. Kiddle Encyclopedia.