The Walter Pyramid is a 5,000 seat indoor multi-purpose arena on the campus of Long Beach State University in Long Beach, California.

The Walter Pyramid opened on November 30, 1994. It hosted a Long Beach State 49ers men's basketball game against University of Detroit Mercy. The game aired live on ESPN. A standing-room only crowd of 5,021 saw Long Beach win with a final score of 71-64 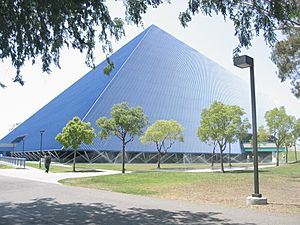 The Walter Pyramid was designed by Don Gibbs. It was built by the Nielson Construction Company of San Diego. The building of Walter Pyramid cost approximately $22 million dollars. Each side of the perimeter of Walter Pyramid measures 345 feet (105 m), making it a mathematically true pyramid. It is one of only three true pyramid-style buildings in the United States. The others are the Luxor Hotel Vegas in Las Vegas, Nevada, and Pyramid Arena in Memphis, Tennessee.

The Walter Pyramid rises 18 stories above the Long Beach skyline. Its exterior is clad in sheets of dark-blue corrugated aluminum.

On March 5, 2005, Long Beach State renamed The Pyramid to Walter Pyramid in honor of Dr. Mike and Arline Walter. The Walters were given this recognition for a $2.1 million donation given to the university. In addition to being the vice-president of Levi Strauss & Co., Dr. Mike Walter was also a dean for Long Beach State's College of Business Administration from 1993 to 2000.

A panoramic view of Walter Pyramid on the campus of California State University, Long Beach

All content from Kiddle encyclopedia articles (including the article images and facts) can be freely used under Attribution-ShareAlike license, unless stated otherwise. Cite this article:
Walter Pyramid Facts for Kids. Kiddle Encyclopedia.