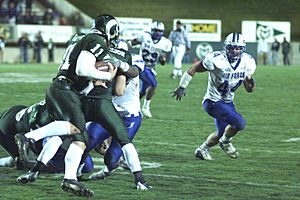 The Mountain West Conference (abbreviated as either "MW" or "MWC") is a group of colleges and universities in the Western United States, who play NCAA Division I sports against one another. In football, the MW plays in the top-level Division I FBS.

The league was formed in 1999 when eight schools split from the Western Athletic Conference (WAC). Most of the original members had been members of the WAC before it grew from 10 schools to 16 in 1996.

Due to a major realignment of Division I conferences, the MW and Conference USA announced plans to merge into one conference, possibly for the 2013–14 school year. However, because of money issues, the conferences backed away from a full merger. They planned to form an alliance for scheduling and television purposes. After both conferences added more schools, they backed out of the planned alliance.

Eleven schools are "full members", meaning that they play almost all of their sports in the MW.

Two schools are "associate members", meaning that they play in the MW in some sports while playing most other sports in another league. Both schools play only one sport in the MW.

Two of the MW's first members, plus one school that joined later, are no longer in the conference.

All content from Kiddle encyclopedia articles (including the article images and facts) can be freely used under Attribution-ShareAlike license, unless stated otherwise. Cite this article:
Mountain West Conference Facts for Kids. Kiddle Encyclopedia.