Kids Encyclopedia Facts
Not to be confused with Laramie County, Wyoming.

Laramie /ˈlærəmi/ is a city and the county seat of Albany County, Wyoming, United States. The population was 30,816 at the 2010 census. Located on the Laramie River in southeastern Wyoming, the city is west of Cheyenne, at the junction of Interstate 80 and U.S. Route 287.

Laramie was settled in the mid-19th century along the Union Pacific Railroad line, which crosses the Laramie River at Laramie. It is home to the University of Wyoming, Wyoming Technical Institute, and a branch of Laramie County Community College. Laramie Regional Airport serves Laramie. The ruins of Fort Sanders, an army fort predating Laramie, lie just south of the city along Route 287. Located in the Laramie Valley between the Snowy Range and the Laramie Range, the city draws outdoor enthusiasts with its abundance of outdoor activities.

In 2011, Laramie was named as one of the best cities in which to retire by Money Magazine, which cited its scenic location, low taxes, and educational opportunities.

Laramie was named for Jacques LaRamie, a French or French-Canadian trapper who disappeared in the Laramie Mountains in the late 1810s and was never heard from again. He was one of the first Europeans to visit the area. European-American settlers named a river, mountain range, peak, US Army fort, county, and city for him. More Wyoming landmarks are named for him than for any other trapper but Jim Bridger. Because the name was used so frequently, the town was called Laramie City for decades to distinguish it from other uses.

Laramie was founded in the mid-1860s as a tent city near the Overland Stage Line route, the Union Pacific portion of the first transcontinental railroad, and just north of Fort Sanders army post. The rails reached Laramie on May 4, 1868 when construction crews worked through town. A few passengers arrived on that same day. The first regular passenger service began on May 10, 1868, by which time entrepreneurs were building more permanent structures. Laramie City (as it was known in early years) soon had stores, houses, a school, and churches. Laramie's fame as the western terminal of the Union Pacific Railroad, acquired when the 268-mile (431 km) section from North Platte, Nebraska was opened in May ended in early August 1868 when a 93-mile (150 km) section of track was opened to Benton, 6 miles (9.7 km) east of present-day Sinclair, Wyoming.

"Old Main" building at the
University of Wyoming
in Laramie - 1908

Early businesses included rolling mills, a railroad-tie treatment plant, a brick yard, a slaughterhouse, a brewery, a glass manufacturing plant, and a plaster mill, as well as the railroad yards. In 1886, a plant to produce electricity was built. Several regional railroads were based in Laramie, including the Laramie, North Park and Pacific Railroad and Telegraph Company founded in 1880 and the Laramie, North Park and Western Railroad established in 1901.

Governor Francis E. Warren signed a bill that established the University of Wyoming (UW) in 1886, the only public university in the state. Laramie was chosen as its site, and UW opened there in 1887. Under the terms of the Morrill Act, also known as the Land Grant College Act, in 1891 UW added an agricultural college and experiment station to gain benefits as a land grant college.

In 2004, Laramie became the first city in Wyoming to pass a law to prohibit smoking in enclosed workplaces, including bars, restaurants and private clubs. Opponents of the clean indoor air ordinance, funded in part by the R.J. Reynolds Tobacco Company, immediately petitioned to have the ordinance repealed. However, the voters upheld the ordinance in a citywide referendum which was conducted concurrently with the 2004 general election. The opponents challenged the validity of the election in court, claiming various irregularities. However, the judge ruled that the opponents had failed to meet their burden of showing significant problems with the election, and the ordinance, which had become effective in April 2005, remained in effect. In August 2005, Laramie's City Council defeated an attempt to amend the ordinance to allow smoking in bars and private clubs. 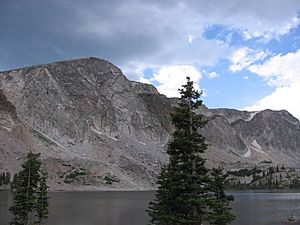 Laramie is on a high plain between two mountain ranges, the Snowy Range, about 30 miles (48 km) to the west, and the Laramie Range, 7 miles (11 km) to the east. The city's elevation above sea level is about 7,165 feet (2,184 m). The Laramie River runs through Laramie toward its confluence with the North Platte River east of the Laramie Range.

There were 13,394 households of which 20.4% had children under the age of 18 living with them, 33.0% were married couples living together, 6.9% had a female householder with no husband present, 3.7% had a male householder with no wife present, and 56.4% were non-families. 36.9% of all households were made up of individuals and 6.2% had someone living alone who was 65 years of age or older. The average household size was 2.14 and the average family size was 2.85.

There were 11,336 households out of which 23.0% had children under the age of 18 living with them, 38.3% were married couples living together, 8.0% had a female householder with no husband present, and 50.5% were non-families. 33.2% of all households were made up of individuals and 6.4% had someone living alone who was 65 years of age or older. The average household size was 2.19 and the average family size was 2.83.

Laramie Jubilee Days started in 1940 to celebrate Wyoming Statehood Day on July 10. Since then, Jubilee Days has expanded to include several days around the Fourth of July. Events typically include food, live music, games, carnival rides, a street fair, a parade, a softball tournament, and rodeo events.

The Geological Museum at the University of Wyoming is open to the public and houses more than 50,000 catalogued mineral, rock, and fossil specimens, including a dinosaur exhibit. The university's art museum offers gallery exhibits, lectures, workshops, classes, and public tours year-round. The Fine Arts Concert Hall on campus presents frequent concerts and recitals during the school year. Housed in the Ivinson Mansion near the center of town is the Laramie Plains Museum. The Wyoming Children's Museum and Nature Center has interactive exhibits and pottery classes for children aged 3 and older.

The central library of the Albany County Library system, with a wide range of materials for adults and children, is near downtown Laramie; the system's branch libraries are in Centennial, 28 miles (45 km) west of Laramie and Rock River, 32 miles (51 km) northwest of Laramie. William Robertson Coe Library, the main library of the University of Wyoming, has materials for general research in business, education, fine arts, science, humanities, and the social sciences as well as audio visual and government documents collections. The Brinkerhoff Geology Library specializes in geology, geophysics, physical geography, mining and petroleum geology, and geological engineering. Also at the university are the George W. Hooper Law Library, the Library Annex, a high-density storage facility located in the basement of the UW Science Complex, the Rocky Mountain Herbarium Library, a learning resources center with materials for teachers and children, and an archives, rare book, and manuscript repository known as the American Heritage Center. 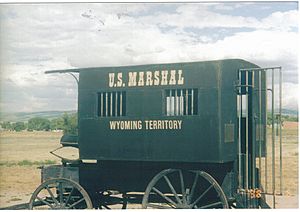 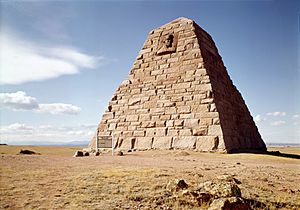 Two other Albany County sites near Laramie are on the NRHP. About 20 miles (32 km) east of the city is the Ames Monument, a large granite pyramid dedicated to brothers Oakes Ames, a Republican member of the United States House of Representatives from Massachusetts, and Oliver Ames, Jr., who were influential in building the Union Pacific portion of the First Transcontinental Railroad. Oakes Ames was also implicated in the Credit Mobilier scandal and censured by the U.S. House. The other site is Como Bluff, a long ridge extending east–west between Rock River and Medicine Bow. Geologic formations in the ridge contain fossils, including dinosaurs, from the Late Jurassic. 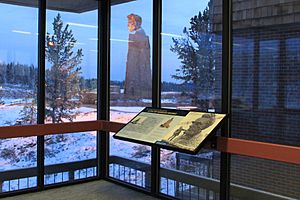 According to a 2012 report by the Wyoming Department of Environmental Quality (DEQ), a former industrial site for the production of aluminum, arsenic acid, strategic metals and cement now owned by L.C. Holdings, 2 miles (3.2 km) south of Laramie had arsenic concentrations in on-site water well samples 3,100-times higher than DEQ cleanup levels. The site has been storing a 1,000-ton pile of contaminated flue dust from Bunker Hill Mine and Smelting Complex, an Idaho superfund site, under a tarp since the 1980s. In 2011 L.C. Holdings entered the DEQ's "Voluntary Remediation Program".

All content from Kiddle encyclopedia articles (including the article images and facts) can be freely used under Attribution-ShareAlike license, unless stated otherwise. Cite this article:
Laramie, Wyoming Facts for Kids. Kiddle Encyclopedia.