Centennial is a census-designated place (CDP) in Albany County, Wyoming, United States. The population was 270 at the 2010 census. 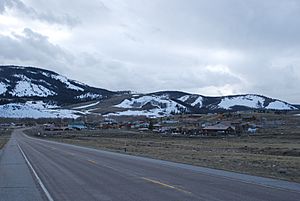 As the Union Pacific Railroad was pushing west to link up with the Central Pacific Railroad, as part of the First Transcontinental Railroad, they sent logging crews into the Snowy Range, in the Medicine Bow Mountains, to cut down timber (mainly Lodgepole Pine) for railroad ties. A work camp was built on the site of the town. After they had completed most of their work and the workers started having conflicts with area Indians, the crews left the area. After the area was opened to homesteaders a few ranchers returned to the area.

Men working for I. P. Lambing (superintendent at the mine) of Golden, Colorado and Colonel Stephen W. Downey (a lawyer and president of what would become Centennial Gold Mining Company) of Laramie, Wyoming, discovered gold on what would become Centennial Ridge on Centennial Mountain in 1875. As miners and prospectors started coming to the area, to work the Centennial Mine (also called the Downey Load and Centennial Vein), they reestablished a community on the old work camp site in 1876 and named the town Centennial in honor of the 100th anniversary of the signing of the Declaration of Independence and founding of the United States. Most of the gold was stripped from the mines by 1877, but the town was now established and merchants who came to serve the miners stayed to serve the nearby ranchers.

On the west side of Centennial Ridge a copper claim was discovered by Jacob Schnitzler in 1896.

Gold had people coming to the area again in 1902, and again in 1923-1924, but no significant amount was ever found. Loggers returned to the area in 1905 to cut timber for a coal mine near Coalmont in Jackson County, Colorado. Acme Consolidated Gold & Mining Company, headed by Isaac Van Horn, bought up timber land around the town, the townsite (Interstate Town Site Company), opened a sawmill, a planing mill and lumber yard, and opened a newspaper, the Centennial Post. The partners in Acme Consolidated Gold & Mining Company, Van Horn, Fred A. Miller, and Edward R. Miller, also formed the Laramie, Hahns Peak and Pacific Railway to transport the coal out to eastern markets. The railroad, originating in Laramie, reached Centennial on June 17, 1907 (it would finally reach Coalmont in 1911). That same year a bank was founded.

A. J. Hull, Jesse Northrop, and B. F. Northrop located the Platinum Queen (aka Queen Mine) on September 23, 1923, approximately 2.3 miles southwest of Centennial, on Centennial Ridge. Most activity around the mine area ceased after the Stock Market Crash of 1929 and the advent of the Great Depression.

There were 97 households out of which 15.5% had children under the age of 18 living with them, 50.5% were married couples living together, 2.1% had a female householder with no husband present, and 41.2% were non-families. 30.9% of all households were made up of individuals and 5.2% had someone living alone who was 65 years of age or older. The average household size was 1.97 and the average family size was 2.44.

All content from Kiddle encyclopedia articles (including the article images and facts) can be freely used under Attribution-ShareAlike license, unless stated otherwise. Cite this article:
Centennial, Wyoming Facts for Kids. Kiddle Encyclopedia.