The Ames Monument is a large pyramid in Albany County, Wyoming, designed by Henry Hobson Richardson and dedicated to brothers Oakes Ames and Oliver Ames, Jr., Union Pacific Railroad financiers. It marked the highest point on the First Transcontinental Railroad, at 8,247 feet (2,514 m).

The town of Sherman rose up around it, but then Union Pacific moved its tracks to the south, leaving Sherman to become a ghost town.

Oliver served as president of the Union Pacific Railroad from 1866 to 1871, while Oakes, a U.S. representative from Massachusetts, asserted near-total control of its construction. In 1873, investigators implicated Oakes in fraud associated with financing of the railroad. Congress subsequently censured Oakes, who resigned in 1873 and died soon thereafter.

The Ames Monument is located about 20 miles (32 km) east of Laramie, Wyoming, on a wind-blown, treeless summit south of Interstate 80 at the Vedauwoo exit. The monument is a four-sided, random ashlar pyramid, 60 feet (18 m) square at the base and 60 feet (18 m) high, constructed of light-colored native granite. The pyramid features an interior passage, now sealed, alongside the perimeter of the structure's base.

Noted American architect H. H. Richardson designed the pyramid, which includes two 9 feet (2.7 m) tall bas-relief portraits of the Ames brothers by sculptor Augustus Saint-Gaudens on the east and west sides of the pyramid's top. Saint-Gaudens chiseled the bas-reliefs from Quincy, Massachusetts, granite. The north side, which at one time faced the railroad tracks, displays one-foot-high letters grouted in the granite noting: "In Memory of Oakes Ames and Oliver Ames". The monument is one of a half-dozen or more projects that Richardson did for the Ames family.

The pyramid is one of only two examples of Richardson's work west of the Mississippi River, the other being the Isaac H. Lionberger House in St. Louis less than two miles from the river. Richardson's monolithic structure employed rough-hewn granite boulders in its construction. The monument's stones at the base are five feet by eight feet and weigh thousands of pounds each. The pyramid narrows from the base to become progressively smaller towards the top at a ratio of four inches to the foot.

The audacity of building a transcontinental railroad in the 1860s was "today's equivalent of the mission to Mars: Big, expensive and impossible," according to University of Wyoming historian Phil Roberts. President Abraham Lincoln reportedly told Oakes Ames that if he could get the transcontinental railroad built then he would be "the most remembered man of the century." Lincoln personally recruited Oakes after progress by and financial support for Credit Mobilier of America, the construction company charged with building the railroad, ground to a halt. The Ames brothers succeeded where others failed and completed the transcontinental railway. However, in 1873 charges of financial fraud were leveled at Oakes, tarnishing his and the Union Pacific Railroad Company's reputation.

Public outcry towards Oakes and other "Kings of Frauds" associated with scandal threatened the Ames family reputation and the Ames Company that dated back to 1774 when the company started making steel-edged shovels. The Ames Company later sold axes and shovels to miners during the California Gold Rush. The company continued its heritage as earth movers by supplying the government shovels during the Civil War, for excavating the Panama Canal, for mining Pennsylvania coal fields, and for digging the New York City Subway. 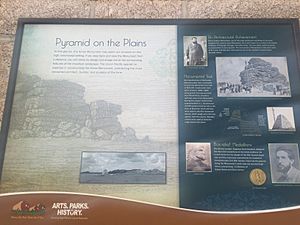 Image of the Ames Monument new Landmark signage 1 of 3. 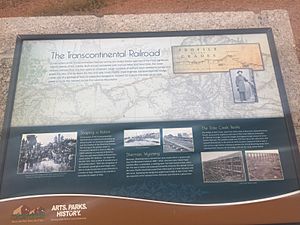 Image of the Ames Monument new Landmark signage 2 of 3. 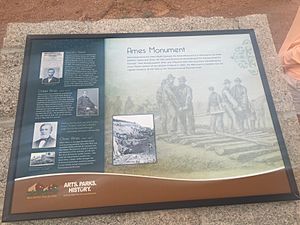 Image of the Ames Monument new Landmark signage 3 of 3.

Memory of the financial scandal that surfaced in 1873 had not been forgotten when the Union Pacific Railroad Company built the monument honoring the Ames brothers during 1881-1882. The Union Pacific Railroad Board of Directors voted in 1875 to erect the grand Ames Monument, in part to help reclaim some of the company's luster lost during implications of fraud leveled earlier at Oakes Ames. Union Pacific stockholders subsequently authorized the construction at a meeting held in Boston on March 10, 1875.

The Norcross Brothers of Worcester, Massachusetts built the monument, employing some 85 workers who lived on site, "where reportedly no liquor or gambling was allowed." Workers cut the stone for the pyramid from a granite outcropping common in the area. They then used oxen teams to skid the stone a half-mile to the work site. The rough-faced granite blocks used to construct the monument in many cases weigh several tons.

Workers constructed the pyramid about 300 yards south of the tracks on a small knoll. When completed in 1882, the Ames Monument stood 300 feet (91 m) south of, and 32 feet (9.8 m) above, the highest elevation of the original tracks of Union Pacific transcontinental railroad at 8,247 feet (2,514 m). President Rutherford B. Hayes underscored the importance of the transcontinental railroad and thereby the Ames brothers by attending the monument's dedication ceremony.

However, when completed in 1882, the Ames Monument was visited by many persons who were allowed to momentarily leave their trains in order to view the monolithic curiosity. It was said that when the construction of the monument was almost completed, some people had the opportunity of being lifted to the top of the monument by a special rig and from their breezy perch could view the surrounding area for a hundred miles in all directions.

The small town of Sherman arose at the site north of the tracks where trains stopped to change engines on their transcontinental journey. The stop provided a roundhouse with five stalls and a turntable, two section houses, and a windmill with water tank. Trains were inspected at Sherman before beginning the long descent from the Sherman Pass summit, either east towards Cheyenne or west across the 130 feet (40 m) high Dale Creek Bridge to the Laramie Valley. The town's death knell came in 1918. The railroad company closed its station house and relocated the tracks about three miles (5 km) south. Residents soon abandoned Sherman, leaving behind a small cemetery that is still present today. 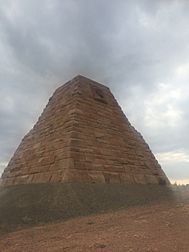 Union Pacific donated the railroad monument to the state of Wyoming in 1983. The structure is listed on the National Register of Historic Places, and is maintained as a Wyoming state historic site. Time and possible vandalism have destroyed some of the features of the bas-relief portraits of the Ames brothers on the monument. The Ames Monument is open year-round, weather permitting.

Work took place in 2010 and 2011 to restore the monument. On October 31, 2016, the site received National Historic Landmark status. The designation was made in recognition of the unique collaboration between Richardson and Saint-Gaudens, two of the era's leading creative figures.

All content from Kiddle encyclopedia articles (including the article images and facts) can be freely used under Attribution-ShareAlike license, unless stated otherwise. Cite this article:
Ames Monument Facts for Kids. Kiddle Encyclopedia.