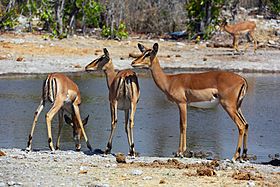 The impala is a medium-sized antelope found in eastern and southern Africa. The sole member of the genus Aepyceros, it was first described to European audiences by German zoologist Hinrich Lichtenstein in 1812. Two subspecies are recognised—the common impala, and the larger and darker black-faced impala. The impala reaches 70–92 centimetres (28–36 inches) at the shoulder and weighs 40–76 kg (88–168 lb). It features a glossy, reddish brown coat. The male's slender, lyre-shaped horns are 45–92 centimetres (18–36 inches) long.

Females are hornless and smaller than males. Males grow slender, lyre-shaped horns 45–92 centimetres (18–36 in) long. The horns, strongly ridged and divergent, are circular in section and hollow at the base. Their arch-like structure allows interlocking of horns, which helps a male throw off his opponent during fights; horns also protect the skull from damage.

The glossy coat of the impala shows two-tone colouration the reddish brown back and the tan flanks; these are in sharp contrast to the white underbelly. Facial features include white rings around the eyes and a light chin and snout. The ears, 17 centimetres (6.7 in) long, are tipped with black. Black streaks run from the buttocks to the upper hind legs. The bushy white tail, 30 centimetres (12 in) long, features a solid black stripe along the mid-line. 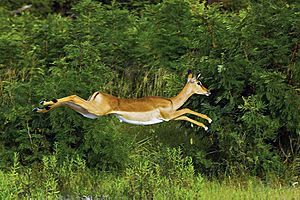 The impala is diurnal (active mainly during the day), though activity tends to cease during the hot midday hours; they feed and rest at night.

The impala is an important prey species for several carnivores, such as cheetahs, leopards and lions. The antelope displays two characteristic leaps it can jump up to 3 metres (9.8 ft), over vegetation and even other impala, covering distances of up to 10 metres (33 ft); the other type of leap involves a series of jumps in which the animal lands on its forelegs, moves its hindlegs mid-air in a kicking fashion, lands on all fours and then rebounds.

It leaps in either manner in different directions, probably to confuse predators. At times, the impala may also conceal itself in vegetation to escape the eye of the predator. The most prominent vocalisation is the loud roar, delivered through one to three loud snorts with the mouth closed, followed by two to ten deep grunts with the mouth open and the chin and tail raised; a typical roar can be heard up to 2 kilometres (1.2 mi) away. 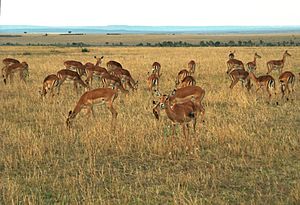 A herd grazing in Maasai Mara

Impala browse as well as graze; either may predominate, depending upon the availability of resources. Impala prefer places close to water sources, and resort to succulent vegetation if water is scarce. Impala feed on soft and nutritious grasses. A study revealed that time spent in foraging reaches a maximum of 75.5% of the day in the late dry season, decreases through the rainy season, and is minimal in the early dry season (57.8%).

All content from Kiddle encyclopedia articles (including the article images and facts) can be freely used under Attribution-ShareAlike license, unless stated otherwise. Cite this article:
Impala Facts for Kids. Kiddle Encyclopedia.