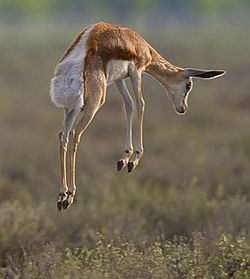 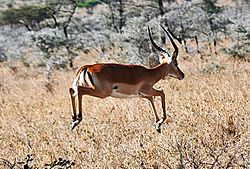 Stotting (or pronking) is a behaviour of some bovines, particularly gazelles. They spring into the air, and lift all four feet off the ground simultaneously. Usually, the legs are held in a relatively stiff position and the back may be arched with the head pointing downward. Many explanations of stotting have been proposed. At least in some cases it is an honest signal to predators that the stotting animal is not worth pursuing.

Stotting makes a prey animal more visible and uses up energy and time that could be spent escaping. Therefore, it is assumed that it must bring some benefit to the stotting animal. A number of possible explanations have been proposed. Stotting may be:

The English evolutionary biologist John Maynard Smith concludes that "the natural explanation is that stotting is an index of condition and of escape capability", used as a signal especially to coursing predators. He also observes that "it is hard to see how it could be a handicap", unless perhaps it is a signal to other gazelles of the same species.

All content from Kiddle encyclopedia articles (including the article images and facts) can be freely used under Attribution-ShareAlike license, unless stated otherwise. Cite this article:
Stotting Facts for Kids. Kiddle Encyclopedia.