Because it is so big, it can kill a small antelope called duikers and eat it, but it could not carry it up to its big nest in the tree.

a very large eagle, with a length of 76-90 cm (30-36 in), an average weight of 5.2 kg (11.6 lbs) and a wingspan of 190-260 cm (6.25-8.5 ft). The adult's plumage has dark brown upperparts, head and upper chest. The body underparts are white streaked with black. The underwing coverts are brown, with pale flight feathers, also streaked with black. The female is usually larger and more streaked than the male. The immature is paler above and has white underparts. It reaches adult plumage in its seventh year.

The Martial Eagle can be found in all Sub-Saharan Africa, wherever food is abundant and the environment favourable. It is never common, but greater population densities do exist in southern Africa, especially in Zimbabwe and South Africa. Generally, these birds are more abundant in protected areas such as Kruger National Park and Kgalagadi Transfrontier Park in South Africa or Etosha National Park, in Namibia.

Its preferred habitat is the semi-desert and open savannah. It avoids dense forests but needs trees to nest in. The territory can vary greatly in size from more than 1000 km² to areas where nests are less than 10 km (6 mi) distant. This disparity is due to differences in food supply. 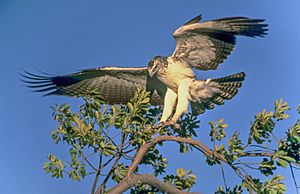 The diet of the Martial Eagle varies greatly with prey availability. Birds up to the size of a stork can be taken, but it more often chooses medium-sized ground-dwelling species such as francolins, guinea fowl or bustards. In some areas mammals constitute the greater part of its diet, with such species as hares, young baboons, hyraxes, mongooses, young impalas, and adult duikers. Remarkably, this powerful aggressive bird has been recorded as preying on 32 kg (82 lb) duikers, which they would have to leave and return to the kill site to feed on repeatedly. It may also attack domestic livestock, including poultry, lambs and young goats, but this is never a great part of its diet.

The Martial Eagle hunts mostly in flight, circling high above its territory, and stooping sharply to catch its prey by surprise. 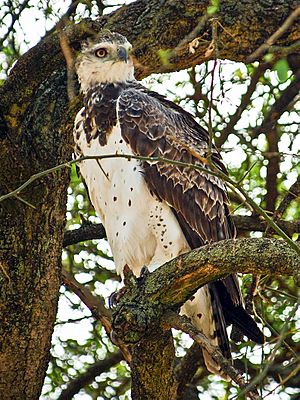 Martial Eagles have no distinctive display flight, but utter a loud cry `klee-klee-klee-kloeee-kloeee-kuleee' during the mating period. They build their nests in trees but also (in the Karoo of South Africa) on electric-power pylons . The nest is a huge construction, used year after year, measuring 2 m (6.6 ft) in diameter and 0.9 m (3 ft) deep. They have a slow breeding rate, laying at most one egg every two years. The egg is incubated for 45 days and the chick fledged at 100 days. Beyond this, despite becoming increasingly independent, juvenile birds will remain close to the nest for another 6 months.

This species suffers from persecution through shooting and poisoning, but also from indirect threats, such as collision with power-lines. Another hazard is caused by steep sided farm reservoirs, in which many birds drown. In South Africa it may have lost 20% of its population in the last three generations. In many areas where they come into contact with man, eagle populations have decreased greatly through persecution, because they are blamed for killing livestock. In reality, domestic animals constitute only a small proportion of their diet, whereas the presence of eagles is a sure sign of a healthy environment. The preservation of this species depends on education of farmers, and the direct protection of nesting sites.

All content from Kiddle encyclopedia articles (including the article images and facts) can be freely used under Attribution-ShareAlike license, unless stated otherwise. Cite this article:
Martial eagle Facts for Kids. Kiddle Encyclopedia.