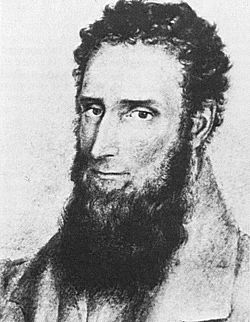 Sir Andrew Smith KCB (3 December 1797 – 11 August 1872) was a Scottish surgeon, explorer, ethnologist and zoologist. He is known as the father of zoology in South Africa. He discovered many species in his major work, Illustrations of the Zoology of South Africa. Smith was born in Hawick, Roxburghshire.

All content from Kiddle encyclopedia articles (including the article images and facts) can be freely used under Attribution-ShareAlike license, unless stated otherwise. Cite this article:
Andrew Smith (zoologist) Facts for Kids. Kiddle Encyclopedia.