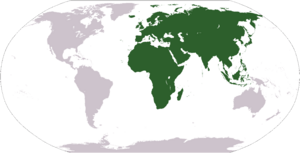 Africa-Eurasia (also called Afro-Eurasia, Eurafrasia, Afrasia) is a supercontinent and the world's biggest landmass. Around 85% (approximately 5.5 billion) of the World population lives there. It is split into two continents by the Suez Canal into the continents of Africa and Eurasia, the latter of which has been historically further subdivided into Europe and Asia.

In geopolitics the mainland of Africa-Eurasia (excluding islands such as the British Isles, Japan and Madagascar) has been referred to as the World Island.

The Old World includes Africa-Eurasia and its surrounding islands.

In geological terms, Africa-Eurasia (or Eurafrasia) may be a supercontinent if Africa collides with Europe. One estimate suggests it will happen in 600,000 years, when the southern tip of Spain reaches Africa. If this happens, the Mediterranean Sea will be isolated from the Atlantic Ocean. Africa is expected to collide with Europe completely in 50 million years, closing the Mediterranean.

All content from Kiddle encyclopedia articles (including the article images and facts) can be freely used under Attribution-ShareAlike license, unless stated otherwise. Cite this article:
Africa-Eurasia Facts for Kids. Kiddle Encyclopedia.