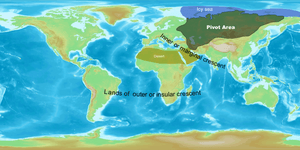 Sir Halford Mackinder's Heartland concept showing the situation of the "pivot area" established in the Theory of the Heartland. He later revised it to mark Northern Eurasia as a pivot while keeping area marked above as Heartland.

Geopolitics is the study of how a country's geography (location, terrain, land size, climate, soil and raw materials) affect its foreign, economic and military policy. The word geopolitics comes from the words "geography" and "politics".

All content from Kiddle encyclopedia articles (including the article images and facts) can be freely used under Attribution-ShareAlike license, unless stated otherwise. Cite this article:
Geopolitics Facts for Kids. Kiddle Encyclopedia.