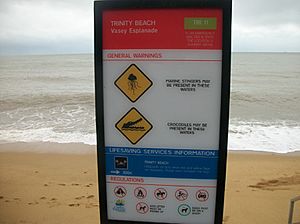 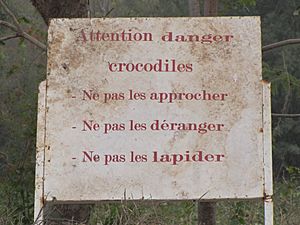 Crocodile attacks on humans are common in places where large crocodilians are native and human populations live. Only 6 of the 23 crocodilian species are considered dangerous to adult humans, and only individuals 2 metres (6.6 ft) in length or more represent a serious danger to humans, as smaller crocodiles are considered incapable of killing humans. However, even the smallest species can inflict painful bites requiring stitches. In addition, a small child may be of a similar size to the prey of some of the crocodilian species incapable of preying on adult humans.

The two species with the most well-known and documented reputation for preying on humans are the Nile crocodile and saltwater crocodile. Each year, hundreds of deadly attacks are attributed to the Nile crocodile in sub-Saharan Africa. In Southeast Asia, Australia, New Guinea, Borneo, and the Solomon Islands attacks by saltwater crocodiles often occur. The mugger crocodile is also very dangerous to humans, killing many people in India every year. The American crocodile is considered to be less aggressive. Only a few (unverified) cases of American crocodiles fatally attacking humans have been reported. The black caiman is also responsible for several recorded human fatalities every year within the Amazon basin and the surrounding regions. The American alligator is responsible for human fatalities, with most occurring in Florida.

All content from Kiddle encyclopedia articles (including the article images and facts) can be freely used under Attribution-ShareAlike license, unless stated otherwise. Cite this article:
Crocodile attack Facts for Kids. Kiddle Encyclopedia.