The South Island giant moa (Dinornis robustus) is a member of the moa family. It was a ratite and a member of the order Dinornithiformes. The Dinornithiformes are flightless birds with a sternum without a keel. They also have a distinctive palate. The origin of these birds is becoming clearer as it is now believed that early ancestors of these birds were able to fly and flew to the southern areas in which they have been found.

The South Island giant moa was the biggest of them all. Adult females stood up to 2 metres (6 ft 6 in) high at the back, and could reach foliage up to 3.6 metres (11 ft 10 in) off the ground, making them the tallest bird species known. Only one specimen of complete or partially complete moa egg has been assigned to the South Island giant moa, found around Kaikōura. This egg, 240mm in length and 178mm in width, is the largest moa egg found in museum collections as of 2006. 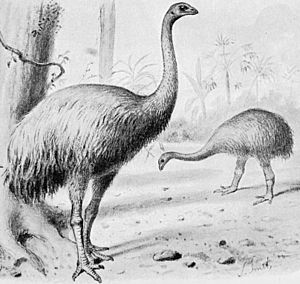 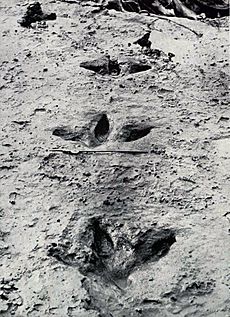 It lived in the South Island of New Zealand, and its habitat was the lowlands (shrubland, duneland, grassland, and forests). Along with other members of the moa family, the South Island giant moa went extinct due to predation from humans in the centuries following human colonization.

All content from Kiddle encyclopedia articles (including the article images and facts) can be freely used under Attribution-ShareAlike license, unless stated otherwise. Cite this article:
South Island giant moa Facts for Kids. Kiddle Encyclopedia.