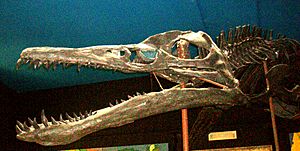 The Pliosaurs were a group of large submarine plesiosaur reptiles from the Mesozoic era. They had short necks and large heads, in contrast to other plesiosaurs. Their sizes ranged from two to 15 metres, and they were predators of large fish and other reptiles. Their streamlined body shape suggests they swam and ate under water.p29

The first specimen was found by Mary Anning, on the 'Jurassic Coast' of Lyme Regis, England in the 1820s. Many of her finds are on display in the Natural History Museum, London.

It was suggested by D.M.S. Watson that plesiosaurs fell into two groups. The pliosaurs were large predators which ate large prey in deep water. The other plesiosaurs were long-necked with smaller heads. Their method was as surface swimmers, mostly eating with their head above water, darting down to snatch smaller fish which were feeding on plankton.

All content from Kiddle encyclopedia articles (including the article images and facts) can be freely used under Attribution-ShareAlike license, unless stated otherwise. Cite this article:
Pliosaur Facts for Kids. Kiddle Encyclopedia.