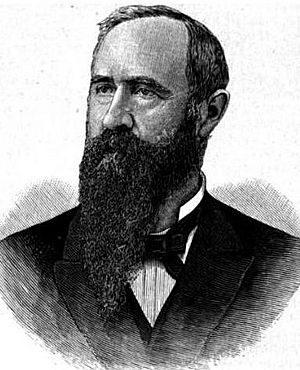 Mark Lindsey De Motte (December 28, 1832 – September 23, 1908) was a U.S. Representative from Indiana. He was also a lawyer, law school dean, newspaper editor and postmaster. The town of DeMotte, Indiana was named after him during his term in Congress.

Born in Rockville, Indiana, De Motte pursued preparatory studies. He was graduated from the literary department of Indiana Asbury (now De Pauw) University, Greencastle, Indiana, in 1853 and from the law department of the same university in 1855. He was admitted to the bar and began practice in Valparaiso in 1855. De Motte was elected prosecuting attorney of the sixty-seventh judicial district in 1856.

He served in the Union Army with the rank of first lieutenant in 1861. He was promoted to captain in 1862. At the close of the war he moved to Lexington, Missouri, and resumed the practice of law. He was editor and proprietor of the Lexington Register. He was an unsuccessful Republican candidate for election to Congress in 1872 and 1876. He served as delegate to the Republican National Convention in 1876. He returned to Valparaiso, Indiana, in 1877 and resumed the practice of law. He organized the Northern Indiana Law School (later Valparaiso University School of Law) in 1879.

He died in Valparaiso, Indiana, September 23, 1908, and was interred in Maplewood Cemetery.

All content from Kiddle encyclopedia articles (including the article images and facts) can be freely used under Attribution-ShareAlike license, unless stated otherwise. Cite this article:
Mark L. De Motte Facts for Kids. Kiddle Encyclopedia.