Attica is a city in Logan Township, Fountain County, Indiana, United States. The population was 3,245 at the 2010 census.

Attica was laid out by George Hollingsworth and platted by David Stump in 1825. The completion of the Wabash and Erie Canal through the town in 1847 brought a considerable amount of growth to the area, and ended (in Attica's favor) a long-standing rivalry with the neighboring communities of Rob Roy, Williamsport and Covington.

Attica is the nearest town to the location where Paul Dresser is believed to have written the state song, "On the Banks of the Wabash, Far Away", and the bridge over the Wabash River bears his name. 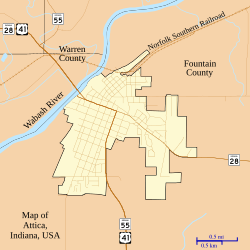 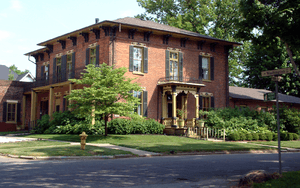 A home in the historic district.

A restaurant on East Main Street.

All content from Kiddle encyclopedia articles (including the article images and facts) can be freely used under Attribution-ShareAlike license, unless stated otherwise. Cite this article:
Attica, Indiana Facts for Kids. Kiddle Encyclopedia.