Huntington, known as the "Lime City", is the largest city in and the county seat of Huntington County, Indiana, United States. It is in Huntington and Union townships. The population was 17,022 at the 2020 census.

Huntington was named by Capt. Elias Murray, a member of the legislature. The name Huntington is derived from Samuel Huntington, a judge, politician, and patriot in the American Revolution. Samuel Huntington is also known for being the 3rd Governor of Connecticut and the 7th President of the Continental Congress. Being a delegate to the Second Continental Congress, Huntington took part in voting for and signing the Declaration of Independence and the Articles of Confederation. 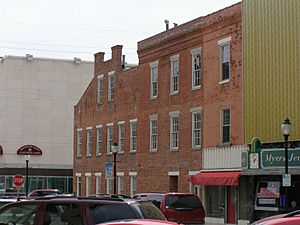 Buildings that once sat along the Wabash and Erie Canal. Foreground was once a boat basin. 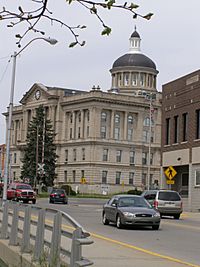 Catholic publisher Our Sunday Visitor is based in Huntington.

All content from Kiddle encyclopedia articles (including the article images and facts) can be freely used under Attribution-ShareAlike license, unless stated otherwise. Cite this article:
Huntington, Indiana Facts for Kids. Kiddle Encyclopedia.