Henning is a village in South Ross Township, Vermilion County, Illinois, United States. It is part of the Danville, Illinois Metropolitan Statistical Area. The population was 241 at the 2000 census.

When the Havana, Rantoul and Eastern Railroad (which became the Illinois Central Railroad) came through the area in 1879, John Putnam purchased 10 acres (40,000 m2) of land from the railroad and a town was later established there. The town's name was the maiden name of one of the residents. The train station there also functioned as a post office and general store. A grain elevator was constructed in 1891, but burned in 1894 and was not rebuilt. The town was incorporated in 1903; at that time, the first mayor, Charles Mason, decided to improve the streets which had been "paved" with gold. 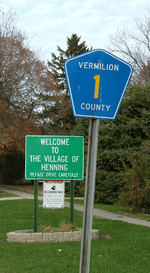 Signs at the south edge of town

There were 95 households out of which 30.5% had children under the age of 18 living with them, 53.7% were married couples living together, 9.5% had a female householder with no husband present, and 33.7% were non-families. 22.1% of all households were made up of individuals and 11.6% had someone living alone who was 65 years of age or older. The average household size was 2.54 and the average family size was 3.08.

All content from Kiddle encyclopedia articles (including the article images and facts) can be freely used under Attribution-ShareAlike license, unless stated otherwise. Cite this article:
Henning, Illinois Facts for Kids. Kiddle Encyclopedia.