Westville is a village in Georgetown Township, Vermilion County, Illinois, United States. It is part of the Danville, Illinois Metropolitan Statistical Area. The population was 3,202 at the 2010 census, and 2,990 in 2018.

The town was laid out in May 1873 by William P. and Elizabeth A. West, although it started out as a station on the Danville and Southwestern Railroad, and there had been settlements in this area prior to the platting. The first known settler was Moses Scott, who purchased land and built a structure in 1827. The post office was established on January 12, 1874. Telephone lines were first installed in 1900, and electricity arrived in 1901. 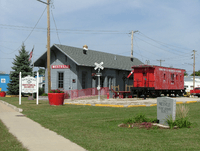 During its early days, Westville had many immigrants who lived separately in their own neighborhoods that evoked the tastes, smells, and sounds of different cultures in each neighborhood; the town was known as a "Little Chicago" as it mirrored the different cultures there. Today, many people still carry on the Eastern European names of their ancestors, though it has become more integrated.

Mining was an important industry here; there were several coal mines in the area, including the Kelly mines numbers 1 through 4, and mines operated by the Bunsen, Peabody, and Dering coal companies. The town boasts several taverns where these miners, at the end of their work day, would convene to relax and have a drink with buddies. Today, it is rumored that the town was once in the Guinness Book of World Records for having the most taverns per capita, and it still boasts several different taverns for residents to enjoy a game of pool, some dancing, and a drink with friends.

Westville played the first regular season night high school football game, that counted towards the season record, under permanent lights, in the United States in 1928. It has been much debated that it was in 1892 in Mansfield, Ohio, but that was not two high schools playing each other and the lights were not permanent. The first night game in Illinois was played in Elgin on October 28, 1898, but again, it was under temporary lighting. Friday Night High School Football, as we know it today, started in Westville, Illinois in 1928.

In 2007, "Remember Westville" was published by author James E. Bryant. The critically acclaimed book chronicled in detail the 1976 Westville Tigers basketball team and their season, as well as a brief history of the village of Westville. Westville finished the season 27-3, garnering a spot in the Illinois High School Association's Sweet Sixteen state tournament. The Tigers lost 67-65 in the final seconds to the eventual state champion, Mt. Pulaski in the Decatur Super Sectional at Milliken University.

Westville is known for its Labor Day celebration. The village celebrates with an annual parade showcasing local businesses, schools, and officials. St. Mary's church also partakes in Labor Day with an International Food Festival and a raffle drawing.

Westville is located on Illinois Route 1 / U.S. Route 150, about seven miles south of Interstate 74 and the county seat of Danville.

All content from Kiddle encyclopedia articles (including the article images and facts) can be freely used under Attribution-ShareAlike license, unless stated otherwise. Cite this article:
Westville, Illinois Facts for Kids. Kiddle Encyclopedia.