This town, founded in 1872, is said to have been named after the novel and play entitled "East Lynne". The Methodist church was actually founded before the town, in 1869. The main trade was in grain. One man, Henry Ludden, filled several early roles in the town, as the first postmaster, the first station agent, and the first to operate a store. 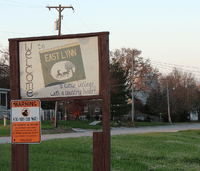 All content from Kiddle encyclopedia articles (including the article images and facts) can be freely used under Attribution-ShareAlike license, unless stated otherwise. Cite this article:
East Lynn, Illinois Facts for Kids. Kiddle Encyclopedia.