Benton County is located in the northwest part of the U.S. state of Indiana, along the border with Illinois. As of 2010, the county's population was 8,854. It contains six incorporated towns as well as several small unincorporated settlements; it is divided into 11 townships which provide local services. The county seat is Fowler.

Benton County was formed February 18, 1840. It is named for Thomas H. Benton (D), U.S. Senator from Missouri. The original county seat selected in 1843 was Oxford, but after a long struggle between contending factions it was moved to Fowler in 1874.

The current Benton County courthouse, located in Fowler, was designed by Gordon P. Randall of Chicago and built in 1874 by Levi L. Leach at a cost of $62,257. The new courthouse was an impressive building from an architectural standpoint, but also provided much-needed improvements in security, including large fire-proof vaults. Randall had designed the Marshall County courthouse a few years earlier. 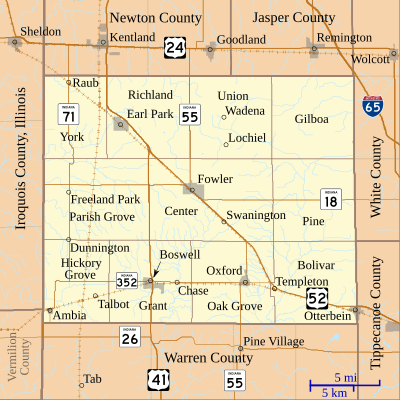 Of the total 2020 population, 6.5% of were veterans. Regarding educational attainment, 42.8% earned a high school diploma or equivalent and 16.1% a bachelor's degree or higher. Of those employed, 20.4% work in education, health care and social services; 19.9% work in manufacturing, 10.1% work in retail, and 8.6% work in agriculture, forestry, fishing, hunting or mining. Finally, 35.4% of science, technology, engineering and math jobs are held by females.

In Benton County, there were 3,783 housing units and 74% of the population owned homes in 2020 with 23.1% of the housing stock occupied by renters.

In 2008 the Benton County Wind Farm began operating with 87 1.5 MW wind turbines. Duke Energy purchases electricity from the wind farm and sells it to customers through its GoGreen program.

In 2009 the Fowler Ridge Wind Farm opened nearby, giving Benton County one of the largest concentrations of wind turbines in the United States east of the Mississippi River.

The county's four public schools are administered by the Benton Community School Corporation.

All content from Kiddle encyclopedia articles (including the article images and facts) can be freely used under Attribution-ShareAlike license, unless stated otherwise. Cite this article:
Benton County, Indiana Facts for Kids. Kiddle Encyclopedia.