Otterbein is a town in Bolivar Township, Benton County and Shelby Township, Tippecanoe County, Indiana, named for William Otterbein Brown who donated land for the town. As of the 2010 census, its population was 1,262.

It is part of the Lafayette, Indiana Metropolitan Statistical Area.

Originally a site known as Pond Grove, Otterbein's first 60 lots were laid out by John Levering and his wife on October 25, 1872, with an addition by Mary A. Clancey on April 24, 1883. The first home was built by Dr. John K. Thompson and the first business, a general store, by Henry H. Moore. William Otterbein Brown, the farmer and stock-dealer for whom the town was named, held the office of postmaster until his death on February 18, 1879. Otterbein High School ran from 1910-1966 when the rest of the high schools in the county were consolidated for Benton Central. The gym and most of the building burned in a fire in 1975.

A Centennial celebration was held over the July 4 holiday in 1972. During the festivities the town elevator, located at the west end of town, burned. As of 2009, there are two churches in Otterbein; Catholic and United Methodist. A fire destroyed Denny's Pharmacy at the corner of First and Main and damaged the adjoining building to the north, the Shoemaker Funeral Home. Students attend Otterbein Elementary School and then move to Benton Central Jr-Sr School which has an Oxford, Indiana address.

The town had two sets of Nickel Plate railroad tracks and a depot until the nationalization of the railroads by the Nixon administration in the 1970s. One set of tracks has since been removed and the private KBS railroad uses the track primarily for grain transport. Since the end of 2008 the railroad right-of-way has been used for the placement of poles that carry electric power from the wind turbines in western Benton County to the substation at Montmorenci.

Haan Crafts, the Frontier Machine Company and the Kerkhoff Truss Plant were the initial occupants in the Industrial Park at the east edge of town which is actually in Tippecanoe County.

Oxford Street, old US 52, is the central E-W street and the only blinking traffic light in town is located at its junction with Main Street. Otterbein is known for its extremely wide, block long Main Street that accommodates two rows of parallel parking in the middle of the street. 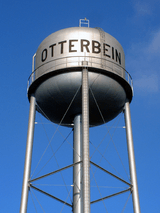 There were 502 households of which 38.4% had children under the age of 18 living with them, 46.4% were married couples living together, 12.5% had a female householder with no husband present, 7.8% had a male householder with no wife present, and 33.3% were non-families. 27.1% of all households were made up of individuals and 11.8% had someone living alone who was 65 years of age or older. The average household size was 2.51 and the average family size was 3.04.

There were 498 households out of which 42.4% had children under the age of 18 living with them, 54.2% were married couples living together, 12.2% had a female householder with no husband present, and 27.9% were non-families. 24.5% of all households were made up of individuals and 11.8% had someone living alone who was 65 years of age or older. The average household size was 2.63 and the average family size was 3.11.

All content from Kiddle encyclopedia articles (including the article images and facts) can be freely used under Attribution-ShareAlike license, unless stated otherwise. Cite this article:
Otterbein, Indiana Facts for Kids. Kiddle Encyclopedia.