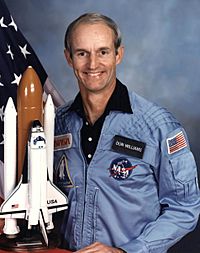 Captain Donald Edward "Don" Williams (February 13, 1942 – February 23, 2016) was a American naval officer and aviator, test pilot, mechanical engineer and NASA astronaut. He has a recorded total of 287 hours and 35 minutes in space. He was born in Lafayette, Indiana.

Williams died on February 23, 2016 in Fort Lauderdale, Florida from complications of a stroke. He was 74 years old.

All content from Kiddle encyclopedia articles (including the article images and facts) can be freely used under Attribution-ShareAlike license, unless stated otherwise. Cite this article:
Donald E. Williams Facts for Kids. Kiddle Encyclopedia.