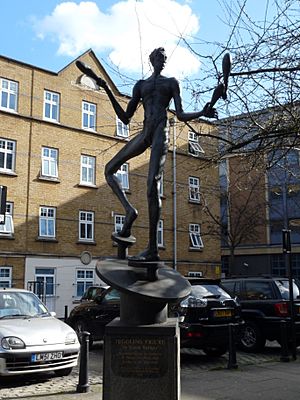 Juggling Figure in a square off Boot Street, Hoxton, London Borough of Hackney

Juggling is the art of repeatedly throwing several objects in the air and catching them, so that at least one object remains in the air at all times. Common juggling props include balls, beanbags, rings, clubs, knives, and torches, although other props are occasionally used.

More generally, the definition of juggling may be stretched to include all forms of artful object manipulation. The most common props are balls (or beanbags), clubs and rings. Some jugglers use more dangerous-looking objects such as knives, fire torches and chainsaws. There are other kinds of juggling prop such as diabolos, yo-yos, poi, devil sticks, cigar boxes, foot bags and hats.

The earliest known record of juggling is Egyptian, from the 15th Beni Hassan tomb of an unknown prince, dating from the middle kingdom period of about 1994-1781 B.C.

Juggling can be for entertainment, art or sport. Juggling involves doing the same thing repetitively. It is this uniformity that is difficult to master. The simplest trick to learn is the three ball cascade.

All content from Kiddle encyclopedia articles (including the article images and facts) can be freely used under Attribution-ShareAlike license, unless stated otherwise. Cite this article:
Juggling Facts for Kids. Kiddle Encyclopedia.