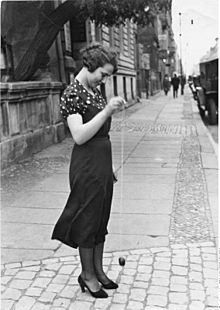 A woman playing with a yo-yo

The yo-yo is a popular toy made with of a length of string tied at one end to a flat spool. It is used by holding the free end of the string (usually by inserting one finger in a slip knot) and pulling at it so as to cause the spool to turn while it is hanging in mid-air, either winding or unwinding the string. It first became popular in the 1920s.

In the simplest play, the string is wound on the spool by hand. The yo-yo is then thrown downwards, so that it goes down and unwinds the string. It then (by inertia) climbs back, winding the string up. Finally the yo-yo is grabbed, ready to be thrown again. Many other trick plays exist, most based on the basic "sleeper" trick. One of the most famous tricks on the yoyo is "walk the dog". This is done by throwing a strong sleeper and allowing the yoyo to roll across the floor. 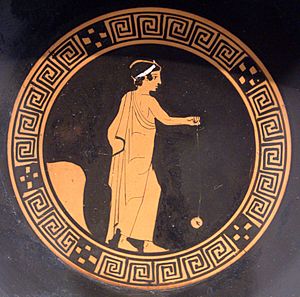 The earliest surviving yo-yo dates to 500 BC and was made using terra cotta (clay) disks. A Greek vase painting from this date shows a boy playing yo-yo(see right). Greek records from this time describe toys made out of wood, metal, or painted terra cotta. The terra cotta disks were used to ceremonially offer the toys of youth to certain gods when a child came of age. Disks of other materials were used for actual play.

Philippine historical records show that 16th century hunters hiding in trees used a rock tied to a string up to 20 feet in length to throw at wild animals beneath them. The string meant they could get the rock back without having to come down from the tree.

All content from Kiddle encyclopedia articles (including the article images and facts) can be freely used under Attribution-ShareAlike license, unless stated otherwise. Cite this article:
Yo-yo Facts for Kids. Kiddle Encyclopedia.