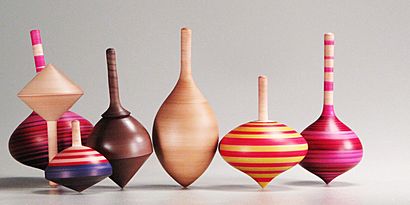 An assortment of spinning tops

A spinning top, or simply a top, is a toy with a squat body and a sharp point at the bottom, designed to be spun on its vertical axis, balancing on the tip due to the gyroscopic effect.

Once set in motion, a top will usually wobble for a few seconds, spin upright for a while, then start to wobble again with increasing amplitude as it loses energy (angular momentum), and finally tip over and roll on its side.

Tops exist in many variations and materials, chiefly wood, metal, and plastic, often with a metal tip. They may be set in motion by twirling a handle with the fingers, by pulling a rope coiled around the body, or by means of a built-in auger (spiral plunger).

Such toys have been used since antiquity in solitary or competitive children games, where each player tries to keep one's top spinning for as long as possible, or achieve some other goal. Some tops have faceted bodies with symbols or inscriptions, and are used like dice to inject randomness into games, or for divination and ritual purposes.

The ubiquity of spinning tops lends to the fact that the toy is used to name many living things such as Cyclosa turbinata, whose name comes from the Latin roots for spinning top.

Smaller tops have a short stem, and are set in motion by twirling it using the fingers. A thumbtack may also be made to spin on its tip in the same way. 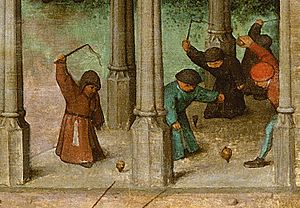 A typical fist-sized model, traditionally made of wood with a blunt iron tip, is meant to be set in motion by briskly pulling a string or rope tightly coiled around the body. The rope is best wound starting near the tip and progressing up along the widening body, so that the tension of the string will remain roughly constant while the top's angular speed increases.

These tops may be thrown forward while firmly grasping the end of the string and pulling it back. The forward momentum of the top contributes to the string's tension and thus to the final spin rate.

In some throwing styles, the top is thrown upside-down, but the first loop of the rope is wound around a stubby "head". Then, the sudden yank on the head as the string finishes unwinding causes the spinning top to flip over and land on its tip.

Alternatively, tops of this class may be started by hand but then accelerated and kept in motion by striking them repeatedly with a small whip.

Some larger models are set in motion by means of a built-in metal auger (spiral plunger). In these models, the actual top may be enclosed in a hollow metal shell, with the same axis but decoupled from it; so that the toy may appear to be stationary but "magically" balanced on its tip.

Some modern tops are kept perpetually in motion by spinning magnetic fields from a special ground plate. 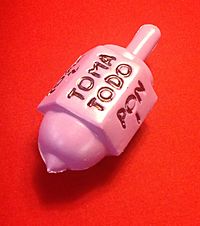 A cheap plastic version of the perinola

Modern tops may have several sophisticated improvements, such as a relatively sharp tip made of ruby or a hard ceramic like tungsten carbide, that reduces the friction with the ground surface. In addition, plastic and metal have largely supplanted the use of wood in tops.

The motion of a top is described by equations of rigid body dynamics, specifically the theory of rotating rigid bodies.

Because of the small contact area between the tip and the underlying surface, and the large rotational inertia of its body, a top that is started on a hard surface will usually keep spinning for tens of seconds or more, even without additional energy input.

Typically the top will at first wobble until friction and torque between the tip and the underlying surface force it to spin with the axis steady and upright. Contrary to what is sometimes assumed, longstanding scientific studies (and easy experimentations reproducible by anyone) show that reducing the friction increases the time needed to reach this stable state (unless the top is so unbalanced that it falls over before reaching it). After spinning upright (in the so-called "sleep" position) for an extended period, the angular momentum will gradually lessen (mainly due to friction), leading to ever increasing precession, finally causing the top to topple and roll some distance on its side. In the "sleep" period, and only in it, provided it is ever reached, less friction means longer "sleep" time (whence the common error that less friction implies longer global spinning time).

The total spinning time of a top is generally increased by increasing its moment of inertia and lowering its center of gravity. These variables however are constrained by the need to prevent the body from touching the ground.

Asymmetric tops of virtually any shape can also be created and designed to balance.

All content from Kiddle encyclopedia articles (including the article images and facts) can be freely used under Attribution-ShareAlike license, unless stated otherwise. Cite this article:
Top Facts for Kids. Kiddle Encyclopedia.