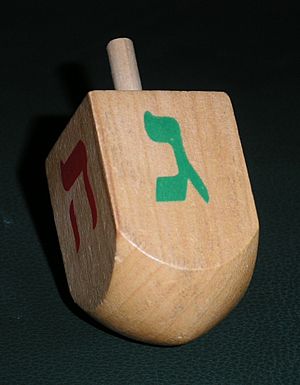 A Dreidel (סביבון,דרעידעל) is a four-sided top which is played in the Hanukkah season by Jewish people. It is game of luck which uses candy, coins or other betting tokens.

All content from Kiddle encyclopedia articles (including the article images and facts) can be freely used under Attribution-ShareAlike license, unless stated otherwise. Cite this article:
Dreidel Facts for Kids. Kiddle Encyclopedia.