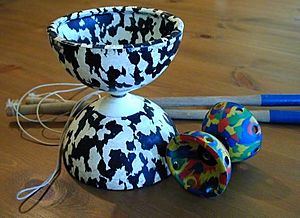 Large and miniature Western rubber diabolos. Wooden sticks are shown in the background.

The diabolo (/diːˈæbəloʊ/ dee-AB-ə-loh; commonly misspelled diablo) is a juggling or circus prop consisting of an axle (British English: bobbin) and two cups (hourglass/egg timer shaped) or discs derived from the Chinese yo-yo. This object is spun using a string attached to two hand sticks ("batons" or "wands"). A large variety of tricks are possible with the diabolo, including tosses, and various types of interaction with the sticks, string, and various parts of the user's body. Multiple diabolos can be spun on a single string.

Like the Western yo-yo (which have independent origins), it maintains its spinning motion through a rotating effect based on conservation of angular momentum. 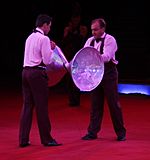 A diabolo is described as "a double-coned bobbin that [is] twirled, tossed, and caught on a string secured by two wands, one held in each hand," and, more generally, as "an object that can be suspended on a string made taut by two held sticks". The Chinese yo-yo, often considered a type of diabolo, has been described as "a short round wooden stick with two round disks, 1.5 cm thick with a space between them, attached on either end of the stick...It will rotate on a string, each end tied to a thin stick," and as "two hollow discs of light wood, with openings in the sides, united by a peg tapering to its center".

As with the yo-yo, the design of the diabolo has varied through history and across the world. Chinese diabolos have been made of bamboo. Wooden diabolos were common in Victorian times in Britain. Rubber diabolos were first patented by Gustave Philippart in 1905. In the late twentieth century a rubberised plastic material was first used. Metal has also been used, especially for fire diabolos. "Parker Brothers used steel for the bobbins [axles], with molded rubber ends, and also made some versions out of hollow Celluloid--which, because of its 'frictionless' properties, spun even faster than steel." Holes and metal strips alter the sound of the spinning diabolo, but create friction.

The size and weight of diabolos varies. Diabolos with more weight tend to retain their momentum for longer, whereas small, light diabolos can be thrown higher and are easier to accelerate to high speeds. Rubber diabolos are less prone to breakage but are more prone to deformations. More commonly used are plastic-rubber hybrids that allow flex but hold their shape. The size of the disc or cone varies, as do the presence and size of holes in the discs or cones which may alter the sound produced. In yo-yos a cone is known as the butterfly shape. Regardless of the presence, size, and shape, "once a diabolo is spinning, the friction of the spinning diabolo against the string creates a whining sound; this is called 'making the diabolo sing.'" "When played hard, the [Chinese] yoyo will give out a sharp shrill sound...The shrill sound would add an exciting atmosphere to the [Shanghai winter] festivals...A skillful player can use a pot cover [with a round handle] as a yoyo [without sound]." A fast whirling kouen-gen produces "a shrill whistling sound...not unlike the note of the steam siren". Diabolos with only one cup ("monobolos") are also used.

The axle can be either a fixed axle or a bearing axle. The former does not spin, while the latter variety spins in one direction. Noticeable differences between the two include friction involved, the amount of time the diabolo can spin for, and tension. There are also certain tricks that are only possible with one type of axle.

The most basic act of diabolo manipulation is to spin it on the string. "The string is placed between the circles, but in order for the diabolo to balance, it must maintain a spinning motion, much like a yo-yo." However, "considerably more skill is needed to twirl a diabolo...than the Yo-yo it resembles," and "the enthusiasts in the game assert that it takes much higher training of eye and muscle than lawn tennis." "Diabolo requires hard practice and highly developed skills, and deserves its independent status." Typically, the user pulls the stick in his or her dominant hand so that the string moves along the axle, turning it. "The player...swing[s] the string right and left." By doing this repeatedly and rapidly the diabolo rotates faster. The diabolo spin can be accelerated more quickly using various methods: the 'whip' rotates the diabolo faster by moving one handstick in front of the user's body and past the other handstick, the 'wrap' rotates the diabolo faster when the user wraps a loop of the string around the axle. Both methods increase the amount of string contact with the axle in any given time.

To spin the top, you raise and lower the sticks alternately, with a quick backward shift of the string at the end of each rotating impulse. When the speed is great enough to stabilize the top in flight, just whip the sticks apart to toss it into the air. As the spool comes down you catch it on a sloping string and let it roll down into slack bunched near one end.

Once spin speed is increased to a sufficient level that the diabolo is stable, the user can then perform tricks. "Skillful players can set it whirling at a rate of 2,000 revolutions a minute, it is said." Depending on how long a trick takes to perform, the user will normally have to spend some time increasing the spin speed of the diabolo before performing other tricks. Skilled users can perform multiple tricks while maintaining the spin speed of the diabolo. "A skilled person [can] catch it, hurl it fifty or sixty feet into the air, then catch it again with little effort."

There are countless tricks and variations that fall outside the above categories; these are often more difficult and form the cutting edge of modern diabolo routines. Some examples are: 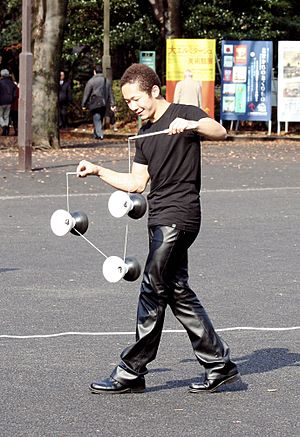 Perhaps the most active area of development for diabolo performance involves tricks with more than one diabolo on a single string. When manipulating multiple diabolos "low", the diabolos orbit continuously on the string in a "shuffle". Shuffles are either synchronous (commonly referred to as "sync") or asynchronous ("async"), depending on whether the diaboloist's hands' movements occur simultaneously or not; shuffles may also be performed with only one hand.

Another advanced diabolo style is vertax (vertical axis; also known as "Excalibur"). This is where the diabolo is "turned vertically" by means of "whipping" and is continually spun in this upright state. The person spinning it needs to rotate their body to keep up with the constant whipping action due to the momentum and centripetal motion at which the diabolo spins. Although the number of tricks seems limited, people are finding more ways to perform with this style, including vertax genocides, infinite suicides, and many suns, orbits, and satellites. It is also possible to have two diabolos in one string in vertax; this feat has been achieved by a small number of diaboloists. It has also been done in the form of a fan. Most of these tricks are accomplished by street performers in competitions, notably the GEDC and the Taipei PEC. Some cutting-edge skilled vertax jugglers include William (Wei-Liang) Lin (in 2006, ranked #1 in the world), Ryo Yabe (multiple diabolos), Higami (a Japanese juggling group, noted for inventing the first 'infinite suicide vertax'), and Jonathan P. Chen (noted for inventing the vertax genocide); these jugglers are former and multiple winners of the above-mentioned cups. Eric and Antonin (France) and Nate and Jacob Sharpe (USA) have contributed greatly to the development of vertax passing techniques. Finally, Alexis Levillon invented many vertax tricks including vertax integrals, furthered multidiabolo vertax, and has also invented the "Galexis" style, where one diabolo is horizontal, while the other is in vertax.

This is a relatively recent style of diabolo that is gaining popularity. It utilizes the diabolo so that it has little or no spin at all. Then it can be caught and passed and manipulated with different parts of the body instead of just the sticks and string. It has new possibilities and new ideas are arising from this. Examples include catching the diabolo between one's arm and the stick before throwing it back. Tricks with multiple diabolos have also been developed. 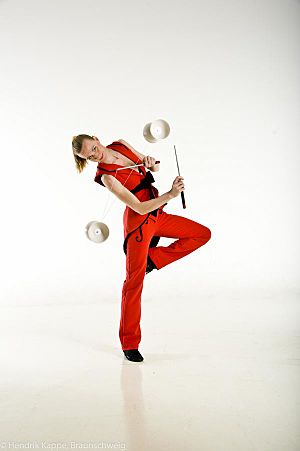 Instead of having two sticks connected by a string, the diabolo is manipulated on a loop of string held around the hands. This opens up a variety of new tricks. Yo-yo type slack tricks can also be performed in a loop.

Monobolo is a variation of the diabolo where instead of having two diabolo cups, there is only one and a weight on the other side. The monobolo can be used in the same fashion as normal diabolos. However, if a monobolo is put into excalibur, or horizontally, monobolos can be manipulated to be like a spinning top. To start a monobolo, twist the string around the axle and then let it gain some speed.

In 2006 Circus Smirkus presented a duo diabolo act starring Jacob and Nate Sharpe, with advanced tricks including the first double sprinkler pass in a performance as well as some five-diabolo passing.

The diabolo programs of many Chinese schools provide performances during the Chinese New Year or near the end of the school year.

All content from Kiddle encyclopedia articles (including the article images and facts) can be freely used under Attribution-ShareAlike license, unless stated otherwise. Cite this article:
Diabolo Facts for Kids. Kiddle Encyclopedia.