La Nouba was a Cirque du Soleil show that ran for 19 years in a custom-built, freestanding theater at Disney Springs' West Side at the Walt Disney World Resort in Orlando, Florida. It was a contemporary circus performance featuring acrobats, gymnasts, and other skilled performers. The show's creation was directed by Franco Dragone, who also directed many of Cirque du Soleil's earlier shows. Its title derives from the French phrase faire la nouba, meaning "to party" or "to live it up".

In 2007, 12 members of the power track act performed a routine during the pre-game show of Super Bowl XLI.

The theater housing La Nouba was the first freestanding permanent structure built for Cirque du Soleil. The theater was designed by Michel Crête, Michel Aubé of Scéno Plus, Walt Disney Imagineering, and the architects of the Rockwell Group of New York. It could seat a total of 1,671 people per show. The building incorporated elements of fabric and tension reminiscent of the form of a circus tent. 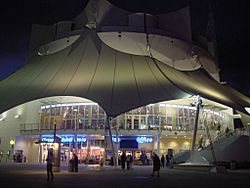 The home of La Nouba at Disney Springs

The backdrop of the stage was a trellis measuring 60 by 200 feet (18 m × 61 m) and made of PVC panels and scrim. The stage floor itself had five elevator lifts, each with a 3,000 pounds (1,400 kg) load capacity. These lifts could move at a rate of 1 foot per second (0.30 m/s) and rise to a maximum height of 16 feet (4.9 m). The center stage lift, in addition to elevating, could also descend 16 feet (4.9 m) below the stage on a second axis. Other movable set elements included the two téléphériques installed along the back wall which could transport acrobatic equipment, props, and scenery at a pace of 4 feet per second (1.2 m/s).

Four retractable power track floors were housed in the stage. Each floor weighed over 10,000 pounds (4,500 kg) and could move up to 2 feet per second (0.61 m/s). The trampoline bed was tighter and used a second generation of springs, allowing the performers to jump higher and faster down the track, which measured 60 feet (18 m) in length. The trampolines consisted of two overlapping tracks, as seen in Alegría. The entire stage deck was layered with impact-resilient Mondo Sport Floor over wood in order to avoid injury.

The theater's immense height (ground level to fly height was 100 feet (30 m); ground level to top of the masts was 152 feet (46 m)) allowed the scenic and acrobatic equipment to be stored in the ceiling. As another first for Cirque du Soleil, the trapeze net was installed mechanically during the show with no visible stagehands as it was lowered into place from the ceiling.

In La Nouba there were two main character categories: the Cirques, or circus people, sporting bright, fluorescent colors; and the Urbains, or urbanites, who wore dark, muted colors or monochromatic costumes. As in every Cirque du Soleil show, in addition to the performances, there were several distinctive characters that participated in the show, sometimes as performers and sometimes as spectators. In La Nouba, these included:

The show contained the following acts:

Costume designer Dominique Lemieux created thirty different costume concepts and drew up at least ten different designs for each concept. Lemieux mixed historical and traditional circus ideas with contemporary fashions in her designs, and ten special technicians were employed in order to custom dye fabrics, real and synthetic hair, feathers, horsehair, and leather materials used on the various costumes. In the eight weeks she was given to design the costumes (October 24 to December 23, 1998), she created two drastically different styles to separate the urban people from the circus people. The circus people donned bright, neon colors while the urbanites were represented by black, gray, and muted tones. Lemieux used natural, textured fabrics such as hemp to epitomize the urbanites.

Many of the performers underwent a metamorphosis indicated by often dramatic costume changes; for instance, the urbanites' outfits began in dark, muted blues, reds, and greens and ended in white, fairy-like outfits. In the German wheel costumes, Lemieux accented dark colors with fluorescent fabrics to provide a high contrast with the black lights used during this act. The performers were designed to appear as marionettes and to emphasize human anatomy. The costumes designed for the flying trapeze act were tribal and androgynous. They were elaborated with complex collars, head ornaments and tutu skirts for the males. Les Cons were inspired by the Pierrot, with simple, white outfits to depict their innocence.

For all Cirque du Soleil productions, plaster head molds were created to make certain that all wigs, masks, and headpieces fit perfectly. Four different wig designs were created for the show and each wig took one person approximately seventy hours to complete.

Below are the tracks in order as they appear on the CD. Listed after each track title is the act that was associated with the track.

Additional songs in the show not included on the album:

All content from Kiddle encyclopedia articles (including the article images and facts) can be freely used under Attribution-ShareAlike license, unless stated otherwise. Cite this article:
La Nouba Facts for Kids. Kiddle Encyclopedia.