Celluloid is the name of a group of compounds made from nitrocellulose and camphor, plus dyes and other agents. It was the first thermoplastic. It was first called Parkesine in 1856, then Xylonite in 1869 and then Celluloid in 1870. Celluloid is easily molded and shaped. It was first widely used as an ivory replacement, in billiard balls for example. Celluloid catches fire very easily and also easily breaks down, and is no longer widely used. Its most common uses today are for making table tennis balls and guitar picks.

The main use was in movie and photography film industries, which used only celluloid film stock prior to the adoption of acetate safety film in the 1950s. Celluloid is highly flammable, difficult and expensive to produce and no longer widely used, although its most common uses today are in table tennis balls, musical instruments, and guitar picks. 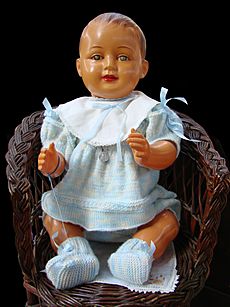 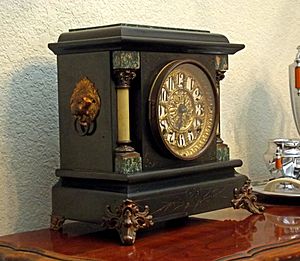 A Seth Thomas black mantel clock, a typical late 19th century American style. The "serpentine" and "stone" of the pillars are made of celluloid glued to wood.

Most movie and photography films prior to the widespread move to acetate films in the 1950s were made of celluloid. Its high flammability was legendary since it self explodes when exposed to temperatures over 150 °C in front of a hot movie projector beam. While celluloid film was standard for 35mm theatrical productions until circa 1950, motion picture film for amateur use, such as 16mm and 8mm film, were on acetate "safety base", at least in the US.

Celluloid was useful for creating cheaper jewellery, jewellery boxes, hair accessories and many items that would earlier have been manufactured from ivory, horn or other expensive animal products. It was often referred to as "Ivorine" or "French Ivory". For this use a form of Celluloid was developed in France that had lines that resembled those of Ivory. It was also used for dressing table sets, dolls, picture frames, charms, hat pins, buttons, buckles, stringed instrument parts, accordions, fountain pens, cutlery handles and kitchen items. The main disadvantage the material had was that it was flammable. Items made in celluloid are collectible today and increasingly rare in good condition. It was soon overtaken by Bakelite and Catalin. Table tennis balls are still made from celluloid. "Parker Brothers...made some versions [of diabolos] out of hollow Celluloid--which, because of its 'frictionless' properties, spun even faster than steel."

Shelf clocks and other furniture items were often covered with celluloid in a manner similar to veneer. This celluloid was printed to look like expensive woods, or materials like marble or granite. The Seth Thomas clock company called its celluloid clock material "adamantine". Celluloid enabled clockmakers to make the typical late Victorian style of black mantel clock in such a way that the wooden case appeared to be black marble, and the various pillars and other decorative elements of the case looked like semi-precious stone. 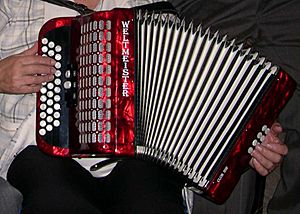 Flaming celluloid pattern on an accordion.

Celluloid was also a popular material in the construction of slide rules. It was primarily used to coat wooden slide rule faces, such as in early A.W. Faber rules, as well as cursor end pieces, such as in Keuffel and Esser rules.

Celluloid remains in use for musical instruments, especially accordions and guitars. Celluloid is very robust and easy to mold in difficult forms, and has great acoustic performance as cover for wooden frames since it does not block wood's natural pores. Instruments covered with celluloid can easily be recognized by the material's typical nacre-like flaming pattern. Thick celluloid panels are cooked in a bain-marie which turns them into a leather-like substance. Panels are then turned on a mold and allowed to harden for as long as three months.

Celluloid is made from a mixture of chemical such as nitrocellulose, camphor, alcohol, as well as colorants and fillers depending on the desired product. The first step is transforming raw cellulose into nitrocellulose by conducting a nitration reaction. This is achieved by exposing the cellulose fibers to an aqueous solution of nitric acid; the hydroxyl groups (-OH) will then be replaced with nitrate groups (-NO2) on the cellulose chain. The reaction can produce mixed products, depending on the degree of substitution of nitrogen, or the percent nitrogen content on each cellulose molecule; cellulose nitrate has 2.8 molecule of nitrogen per molecule of cellulose. It was determined that sulfuric acid was to be used as well in the reaction in order to first, catalyze the nitric acid groups so it can allow for the substitution onto the cellulose, and second, allow for the groups to easily and uniformly attach to the fibers, creating a better quality nitrocellulose. The product then must be rinsed to wash away any free acids that did not react with the fibers, dried, and kneaded. During this time, a solution of 50% camphor in alcohol is added, which then changes the macromolecule structure of nitrocellulose into a homogeneous gel of nitrocellulose and camphor. The chemical structure is not well understood, but it is determined that it is one molecule of camphor for each unit of glucose. After the mixing, the mass is pressed into blocks at a high pressure and then is fabricated for its specific use.

Nitrating cellulose is an extremely flammable process in which even factory explosions are not uncommon. Many western celluloid factories closed after hazardous explosions, and only two factories in China remain in business. 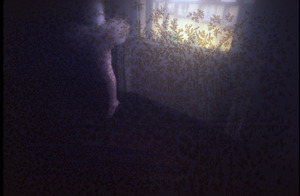 Many sources of deterioration in celluloid exist, such as thermal, chemical, photochemical, and physical. The most inherent flaw is as celluloid ages, the camphor molecules are ‘squeezed’ out of the mass due to the unsustainable pressure used in the production. That pressure causes the nitrocellulose molecules to bind back to each other or crystallize, and this results in the camphor molecules being shoved out of the material. Once exposed to the environment, camphor can undergo sublimation at room temperature, leaving the plastic as brittle nitrocellulose. Also, with exposure to excess heat, the nitrate groups can break off and expose nitrogen gases, such as nitrous oxide and nitric oxide, to the air.

Another factor that can cause this is excess moisture, which can accelerate deterioration of nitrocellulose with the presence of nitrate groups, either newly fragmented from heat or still trapped as a free acid from production. Both of these sources allow the accumulation of nitric acid. Another form of deterioration, photochemical deterioration, is severe in celluloid because it absorbs ultraviolet light well. The absorbed light leads to chain-breakage and stiffening.

Accordions even over 100 years old covered with thick celluloid might be in pristine condition, while on the other hand thin celluloid film reels are often melted in an unrecognisable solid block after decades in storage.

All content from Kiddle encyclopedia articles (including the article images and facts) can be freely used under Attribution-ShareAlike license, unless stated otherwise. Cite this article:
Celluloid Facts for Kids. Kiddle Encyclopedia.