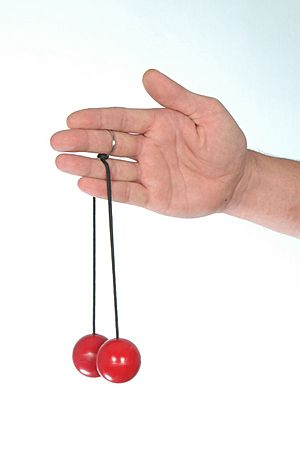 Clackers (also known as Clankers, Ker-Bangers, and numerous other names) were toys popular in the late 1960s and early 1970s. In 1968, tempered glass sphere models emerged that would eventually shatter, sending glass shards into the face of the user and anyone nearby. In the early 1970s, manufacturers changed them to plastic spheres suspended on each string. When they were swung up and down, banging against each other with a lot of force they made the loud "clacking" sound. Clackers are similar in appearance to bolas, the Argentine weapon.

They are formed out of two solid balls , each about 2 inches (5 cm) in diameter, attached to a finger tab with a sturdy string. The player holds the tab with the balls hanging below and through up-and-down hand motion makes the two balls swing apart and back together, making the clacking noise that gives the toy its name. With practice one can make the balls swing so that they knock together both above and below the hand.

Clackers were taken off the market in the United States and Canada when reports came out of children becoming injured while playing with them. Fairly heavy and fast-moving, and made of hard acrylic plastic, the balls would occasionally shatter upon striking each other but not as easily as the 1960s glass models. In the United States, they were classed as a "mechanical hazard" in United States v. Article Consisting of 50,000 Cardboard Boxes More or Less, Each Containing One Pair of Clacker Balls.

Clackers enjoyed a renewal starting in the 1990s using modern plastics which no longer shattered and a redesign consisting of a two free-swinging, opposing triangles, attached to a handle, with weighted balls at the ends. They are often sold in bright neon colors as noisemaker toys or party favors.

In 2017, the original form of the toy was revived in Egypt and gained publicity among school children.

Clackers have also made some appearances in pop culture media. They are featured in the television shows of Dan Schneider, most notably the 2007 episode of Drake & Josh, "Megan's First Kiss," and in the 2008 Zoey 101 episode "Rumor of Love", which described the toys as "the hottest in the 1993 Netherlands", and which increased interest in the toys. Clackers were a plot point in the 1993 "Love and Sausages" episode of The Kids in the Hall TV series. They were also used as weapons by Joseph Joestar, the protagonist of the "Battle Tendency" arc of JoJo's Bizarre Adventure; their appearance there is anachronistic, as "Battle Tendency" takes place in 1938.

All content from Kiddle encyclopedia articles (including the article images and facts) can be freely used under Attribution-ShareAlike license, unless stated otherwise. Cite this article:
Clackers Facts for Kids. Kiddle Encyclopedia.