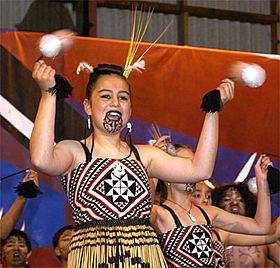 Poi refers to both a style of performing art and the equipment used for engaging in poi performance. As a performance art, poi involves swinging tethered weights through a variety of rhythmical and geometric patterns. Poi artists may also sing or dance while swinging their poi. Poi can be made from various materials with different handles, weights, and effects (such as fire).

Poi originated with the Māori people of New Zealand, where it is still practiced today. Poi has also gained a following in many other countries. The expansion of poi culture has led to a significant evolution of the styles practiced, the tools used, and the definition of the word "poi." 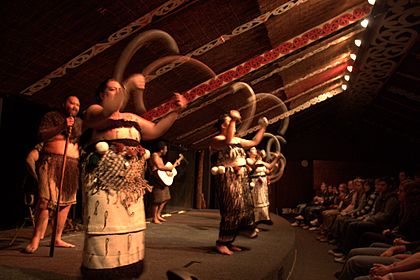 In the Māori language, poi can mean the physical objects used by the dancers, the choreography itself, or the accompanying music. In Māori culture, poi performance is usually practiced by women. Some legends indicate that it was first used by men to develop wrist flexibility for the use of hand weapons such as the club-like patu, mere, and kotiate, but recent academic study has found no evidence to confirm this story.

Māori poi come in two forms: short, with strings equal to the length of the fingertips to the wrist; and long, with strings equal to the distance from fingertips to shoulder. A performance includes storytelling and singing in conjunction with choreographed poi routines and is often presented alongside other disciplines, such as waiata a ringa, haka and titi torea (included in kapa haka performances). Poi feature in the 1980s hit song "Poi E".

Early 20th-century Māori poi at the South Canterbury Museum in Timaru, New Zealand. Made of raupō and stuffed with newspaper.

Originally, poi were most commonly made from harakeke (New Zealand flax, Phormium tenax) and raupō (Typha orientalis). Makers stripped and scraped flax to provide the muka (inner flax fibre), which was twisted into two strands to make the taura (cord) as well as the aho (ties). A large knot was tied at one end of the cord, around which the core was formed from the pithy middle of the raupō stem. Dampened strips of raupō stems were then wrapped around the ball and tied off around the cord, forming the covering . The other end of the cord was often decorated with a mukamuka, a tassel made from muka formed around a smaller knot. Occasionally, smaller tassels called poi piu were affixed to the base of the poi ball. Construction and design varied widely depending on regional, tribal, and personal preferences.

Another variety of poi is poi tāniko. In this construction, the outer shell was made of finely woven muka using a pattern based on a fishing net; these poi sometimes included strands that were dyed yellow to form a diamond pattern known as Te Karu ō te Atua (the Eye of God).

In the late 19th century and the first half of the 20th century, a cottage industry developed from the manufacture of raupō poi for sale to tourists, especially in the Rotorua area. Tourist-friendly variations included miniature poi that could be worn in buttonholes and as earrings.

Traditional raupō poi are less likely to be used by modern poi artists since traditional materials wear quickly with frequent use. Also, flax and raupō are becoming increasingly difficult to find as the wetlands where they are naturally found have been drained or made into conservation reserves (although traditional harvesting is, generally, allowed by law).

Today, most performance poi are made from durable and readily available modern materials. Cores are often made of foam or crumpled paper, while skins consist of plastic or loomed fabrics, such as tulle. Tassels are usually made of wool. 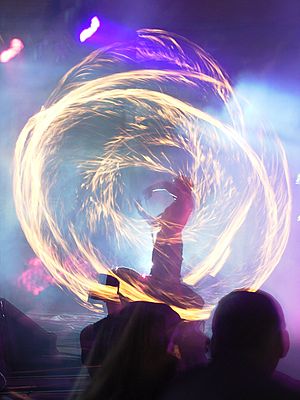 Traditional Maori poi is generally performed in group choreography at cultural events, with vocal and musical accompaniment. By contrast, modern poi is generally performed by individuals, without singing and with less structured choreography. The tools and styles used are more varied. Many people first encounter poi in the form of fire spinning, but fire spinning is just one form of this highly varied art.

Modern poi borrows significantly from other physical arts, including various schools of dance and many object manipulation arts. Poi is practiced around the world and can often be seen at large festivals like Burning Man, European Juggling Convention.

Unlike many physical arts, learning poi does not usually involve formal education. Most spinners learn from each other or teach themselves using DVDs or online resources. A strong sense of community and self-teaching are key elements of modern poi. 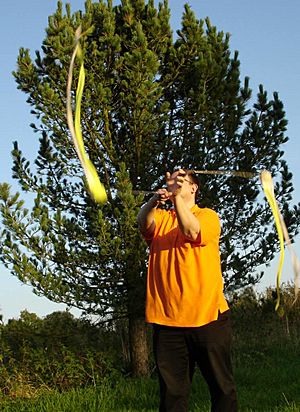 Beginners often learn using a simple pair of practice poi, which are typically constructed from soft materials such as socks or stockings that are weighted with soft household objects such as bean bags, juggling balls, balloons filled with legumes, or small toys. Simple poi can also be constructed from tennis balls and lengths of rope. 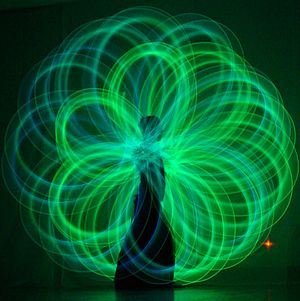 Poi can be performed in the dark to dramatic effect when spinners use poi containing a light source, such as UV-sensitive materials, LED lights, or chemical glow sticks. Glowstringing, or using glowsticks swung from shoelaces, is popular at festivals and raves. It is also noted that while poi focuses on the manipulation of the head (the other side of the cord/chain from where you are holding), glowstringing focuses on the manipulation of the cord.

Meteor were cross-adapted from poi and from a Chinese martial arts weapon called the meteor hammer. The meteor is often constructed similar to poi, or can actually be made using poi. The meteor, however, also incorporates an additional short chain, rope, or bar in the center. This format means that most poi skills will translate to meteor, plus some staff, rope dart and chain whip skills as well. 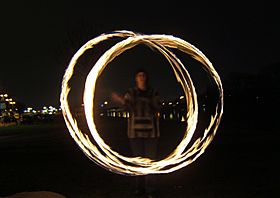 Fire poi use wicks made from kevlar or Technora or another flame resistant material for the weighted ends. The wicks are soaked in fuel, set on fire, and then spun for dramatic effect.

A scientific study conducted by Kate Riegle van West at the University of Auckland showed significant improvements in grip strength, balance, and attention after one month of poi practice. She and others in various countries are working with poi as a therapeutic intervention and helping organisations implement poi wellbeing programmes.

All content from Kiddle encyclopedia articles (including the article images and facts) can be freely used under Attribution-ShareAlike license, unless stated otherwise. Cite this article:
Poi (performance art) Facts for Kids. Kiddle Encyclopedia.