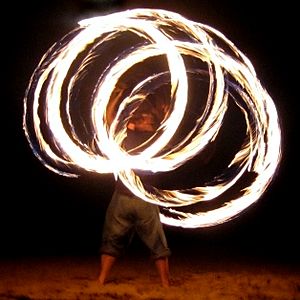 A fire twirler with staff 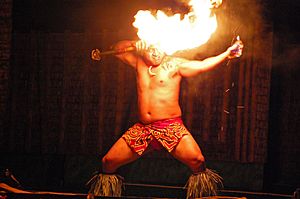 A fireknife performer with a fire knife 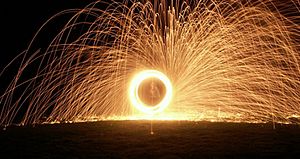 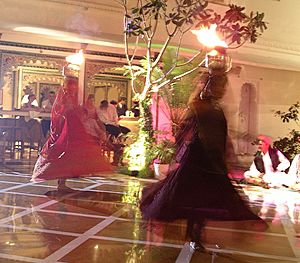 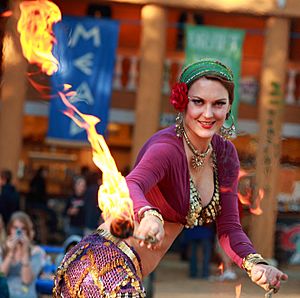 Fire dancer with a torch 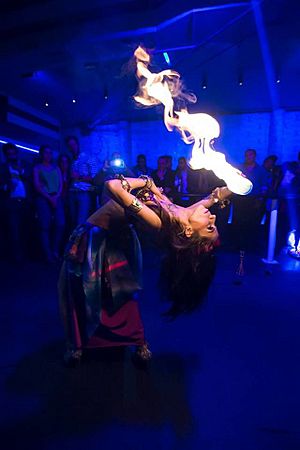 Fire performance is a group of performance arts or skills that involve the manipulation of fire. Fire performance typically involves equipment or other objects made with one or more wicks which are designed to sustain a large enough flame to create a visual effect.

Fire performance includes skills based on juggling, baton twirling, poi spinning, and other forms of object manipulation. It also includes skills such as fire breathing, fire eating, and body burning; sometimes called fakir skills. Fire performance has various styles of performance including fire dancing; the use of fire as a finalé in an otherwise non-fire performance; and the use of fire skills as 'dangerous' stunts. Performances can be done as choreographed routines to music (this type being related to dance or rhythmic gymnastics); as freestyle (performed to music or not) performances; or performed with vocal interaction with the audience. Some aspect of fire performance can be found in a wide variety of cultural traditions and rituals from around the world.

All content from Kiddle encyclopedia articles (including the article images and facts) can be freely used under Attribution-ShareAlike license, unless stated otherwise. Cite this article:
Fire performance Facts for Kids. Kiddle Encyclopedia.