Object manipulators may also be practitioners of fire performance, which is essentially object manipulation where specially designed props are soaked in fuel and lit on fire. 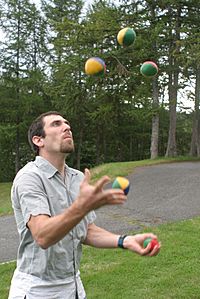 Juggling is a physical skill involving the manipulation of objects for recreation, entertainment or sport. The most recognizable form of juggling is toss juggling. Juggling can be the manipulation of one object or many objects at the same time, using one or many hands. Jugglers often refer to the objects they juggle as props. The most common props are balls, clubs, or rings. Some jugglers use more dramatic objects such as knives, fire torches or chainsaws. The term juggling can also commonly refer to other prop-based manipulation skills such as diabolo, devil sticks, poi, cigar boxes, shaker cups, contact juggling, hooping, and hat manipulation. 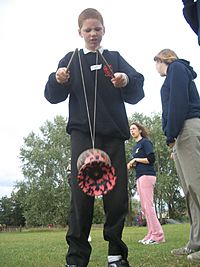 A boy with a diabolo

Spinning and twirling are any of several activities performing spinning, twirling or rotating the spun object for exercise, play or performance. The object twirled can be done directly by one or two hands, the fingers or by other parts of the body. It can also be done indirectly, as in the case of devil or flower sticks, using another object or objects. The origin of twirling can be found in manipulation skills developed for armed combat and in traditional dance. The various twirling skills have become increasingly popular with many associated with circus skills.

A combination of pen spinning tricks.

Skill toys are manipulative objects that is more like toys than juggling skill toys usually are toys that requires a sort of skill with a variety of tricks. Also often used as a fidget toy examples are:

All content from Kiddle encyclopedia articles (including the article images and facts) can be freely used under Attribution-ShareAlike license, unless stated otherwise. Cite this article:
Object manipulation Facts for Kids. Kiddle Encyclopedia.