Sport stacking, also known as cup stacking or speed stacking, is an individual and team sport that involves stacking 9 or 12 (usually 12) specially designed cups in pre-determined sequences as fast as possible. The cups are specially designed to allow for speedier times. Participants of sport stacking stack cups in specific sequences, by aligning the inside left lateral adjunct of each cup with that of the next. Sequences are usually pyramids of 3, 6, or 10 cups. Players compete against the clock or another player.

The governing body setting the rule is the World Sport Stacking Association (WSSA). 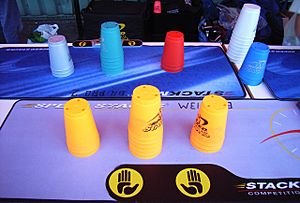 Official sport stacking cups are specially designed to prevent sticking and to allow the competitor to go faster. The cups are reinforced with several ribs on the inside which separate the cups when they are nestled. The exterior is slightly textured to allow better grip. The insides are very smooth and slide past each other easily. The tops of the cups have 1-4 holes to allow ventilation so the cups do not stick. One special line of cups has cups without tops to further decrease air resistance.

Special weighted training cups, called "Super Stacks," are made from metal and are most commonly used directly before competing. The added weight is intended to make the regular cups feel lighter.

Jumbo Stacks are a bigger version of the original speed stacks cups. They are used more commonly in P.E. classes rather than at home.

There are three sequences stacked in official sport stacking events, that are defined by the rule book handed out by the WSSA:

A university study by Brian Udermann, currently at the University of Wisconsin-Lacrosse, confirms that stacking improves hand–eye coordination & reaction time by up to 30% (published in the scientific Journal "Perceptual and Motor Skills" in 2004)

An EEG-study by Melanie A. Hart, Ph.D. Assistant Professor Department of Health, Exercise and Sports Sciences at the Texas Tech University support the claim that cup stacking does utilize both sides of the brain. During the left-hand condition, activity in the right hemisphere was larger than the left, while for the right-hand task, the left hemisphere was greater than the right. Their scientific poster on that topic got awarded by the AAHPERD On the other hand, Hart couldn't get the same results as Udermann when studying improvement on reaction time.

Gibbons, E., Hendrick, J. L., & Bauer, J. State University of New York studied the effects on the reaction time and confirmed Udermann rather than Hart, stating "that the results agreed with the claims made by Speed Stacks, in which practicing cup stacking can improve reaction time. They also state "Even 1 hour of cup stacking practice can improve reaction time in young adults." Speed stacking was also seen as helping people improve in other sports because it helps to improve the hand-eye coordination.

The Department of Kinesiology at Towson University studied the influence of participation in a 6-week bimanual coordination program on Grade 5 students' reading achievement with Sports Stacking being the bimanual activity. In a pilot study, a significant increase was found for the experimental group on comprehension skills, suggesting that Sports Stacking may improve students' reading comprehension skills, regardless of sex.

In 2007 Cupstacking was tested in a study at the University of Nevada-Las Vegas investigating learning as a pair and the advantages of practising together concluding that observation was of greater importance than conversation in learning from a partner. These results are not restricted to Cupstacking alone but reflect the scientific acceptance of the sport 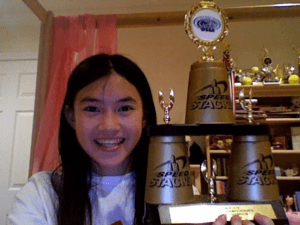 Most sport stacking competitions are geared toward children. There are also divisions for "Special Stackers" (disabled competitors).

The WSSA has set the following protocol for the setting of world records:

The competition's divided into 14 different age divisions, ranging from 6 & under to seniors (65 & up). State, national & world records are recorded on the WSSA website.

All content from Kiddle encyclopedia articles (including the article images and facts) can be freely used under Attribution-ShareAlike license, unless stated otherwise. Cite this article:
Sport stacking Facts for Kids. Kiddle Encyclopedia.