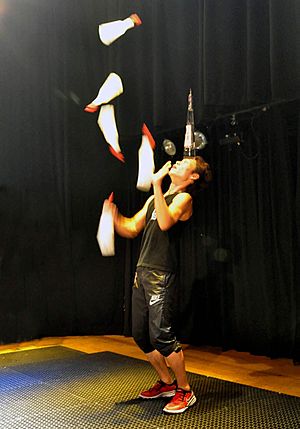 Flair bartending is the practice of bartenders entertaining guests, clientele or audiences with the manipulation of bar tools (e.g. cocktail shakers) and liquor bottles in tricky, dazzling ways. Used occasionally in cocktail bars, the action requires skills commonly associated with jugglers. It has become a sought-after talent among venue owners and marketers to help advertise a liquor product or the opening of a bar establishment. Competitions have been sponsored by liquor brands to attract flair bartenders, and some hospitality training companies hold courses to teach flair techniques.

Flair bartending is sometimes referred to as "extreme bartending" or contracted to "flairtending". The word flair became popular among practitioners in the mid-1990s. "Flair" is also used as a verb (e.g. "to flair"), referring to any trickery used by a bartender in order to entertain guests while mixing a drink. Flair can include juggling, flipping (bottles, shakers), manipulating flaming liquors or even performing close-up magic tricks (also referred to as "bar-magic").

Flair is showmanship added to bartending that enhances the overall guest experience. The ideas behind mixology and drink-oriented or service-minded bartending can still be upheld with the correct application of working flair. Recently, there is a noticeable rise in bartenders combining prominent mixology knowledge and working flair skills all over the world. Working flair and Exhibition flair are very similar on the grounds that they both require precision and practice, however the use of exhibition flair has become a competition oriented style where significantly greater risks are being taken. Working flair, which is much more common, focuses more on delivering drinks to customers while still ensuring visual entertainment.

Both working flair and exhibition flair can be seen in competitions, depending on the rules and regulations of each event. The important distinction between working flair and exhibition flair is not so much the level of liquid in the bottles (though that is a criterion) but the speed in which the bottle is thrown and/or the drink is made. Working flair usually incorporates a "flat" throw, which is when the bottle is released into the air without flipping. This gives an illusion of the bottle floating, but reduces the chances of liquid spilling. This also opens the bartender to be able to use similar routines, regardless of what bottle they grab, as the level of liquid is not a factor. The accepted definition of working flair is "flair that does not noticeably slow service", usually involving bottles filled to various levels (as in a real work situation) that are quickly manipulated and then poured. Exhibition flair almost always involves bottles that are often pre-set with less than 2 ounces (60ml) specifically for flipping. Exhibition flair often involves longer sequences and routines, multiple objects, and performances choreographed to music.

The first open competition to have an exhibition round was the Quest for the Best Bartender in 1995.

The first open competition to have a working flair round was the Quest for the Best Bartender in the World in 1999.

The first all working flair bartending competition was the Flair Bartenders Shakedown in 2006 organized by BarWars LLC.

There are hundreds of flair bartending competitions around the world each year, most of which are local and not well publicized. In 2005 the Flair Bartenders Association (FBA) launched the FBA Pro Tour, a linked series of events where competitors earn points toward the title Pro Tour Champion at the end of the year. In 2007 there were 14 events on the Pro Tour with 7 of them located in the US.

Five-Time World Champion Ken Hall and Jim Allison, president of the FBA, organized six of those seven events. The flagship flair bartending event is Legends of Bartending, which celebrated its twelfth year in 2010.

Some the biggest flair bartending events worldwide include:

The International Bartenders Association was founded in 1951. In 2000, the IBA initiated a World Flair Competition. This event is held at the IBA's annual congress of members, together with the organization's World Classic Cocktail Competition (inaugurated in 1955).

All content from Kiddle encyclopedia articles (including the article images and facts) can be freely used under Attribution-ShareAlike license, unless stated otherwise. Cite this article:
Flair bartending Facts for Kids. Kiddle Encyclopedia.