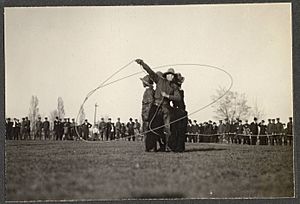 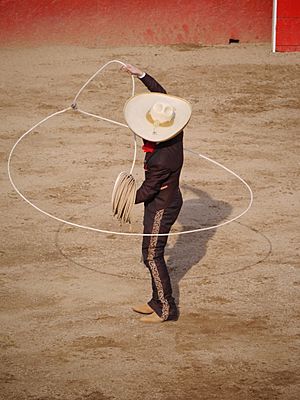 A charro demonstrating trick roping, circa 2013

Trick roping is an entertainment or competitive art involving the spinning of a lasso, also known as a lariat or a rope. It is particularly associated with Wild West shows or Western arts in the United States.

The lasso is a well-known tool of American cowboys, who developed rope spinning and throwing skills in using lassos to catch animals. Cowboys developed various tricks to show off their prowess with the lasso and demonstrations of these tricks evolved into entertainment and competitive disciplines.

The well-established repertoire of tricks can be divided into three fundamental categories: "flat loop", "vertical loop", and "butterfly". In addition, thrown-loop tricks and tricks that involve the use of two ropes are used. Among the vertical loop tricks is the "Texas Skip", which involves the performer spinning the lasso in a wide loop in a vertical plane and jumping through the loop from one side to the other on each rotation.

All content from Kiddle encyclopedia articles (including the article images and facts) can be freely used under Attribution-ShareAlike license, unless stated otherwise. Cite this article:
Trick roping Facts for Kids. Kiddle Encyclopedia.