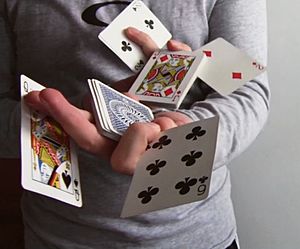 Cardistry is the performance art of card flourishing. Unlike card magic, cardistry is meant to be visually impressive and appear very hard to execute.

The term "cardistry" is a portmanteau of "card" and "artistry". People who engage in cardistry are colloquially known as "cardists".

One-handed cuts: These moves require only one hand to perform. The Charlier Cut is the most familiar one-handed cut; other famous one-handed cuts include Jerry Cestkowski's L-cuts, the Revolution Cut, and Nikolaj Pedersen's Trigger and its variations.

Two-handed cuts: These moves are performed using both hands to grip/hold packets of cards; they often utilize one-handed cuts as a part of the move. These represent the bulk of all cardistry moves, ranging from beginner moves like the 'Five Faces of Sybil', to highly complex and difficult cuts that require months to master. Dan and Dave greatly popularized this category with cuts like 'Pandora'. Other cardists like Daren Yeow, Oliver Sogard, Tobias Levin, Brian Tudor, and Noel Heath have greatly influenced and reformed two-handed cuts.

Fans and Spreads: These moves involve spreading a deck of cards in various ways, typically in a circle. The 'Index/Thumb fan' is the most fundamental move in this category; other common moves in this category include the highly visual 'Riffle Fan' by Dimitri Arleri, the 'LePaul Spread', and the 'Pressure Fan'.

Aerials: These moves involve cards (or packets of cards) being shot or thrown into the air, typically being caught by the other hand. Some of the most famous moves in this category include the 'Spring' and the 'Anaconda Dribble'. Many aerials are done as part of a bigger display sequence.

Isolations/Twirls: These moves are done with a single card. Belonging in this category are 'Palm Shift Isolations', which were showcased by Jaspas Deck in his 2010 video 'Starry Eyed'.

Cardestroy: These moves are done by destroyed cards. Cards can be cut, folded, holey, and more - They are just not undamaged. Popularized by Shivraj Morzaria.

Other Flourishes: These are moves not do not fit in the other categories. These can be springs, dribbles, faro effects, and more. Although cardistry is virtually always done using playing cards, some occasionally choose to perform or practice flourishes using what is referred to, broadly, as trainers. Many attempts have been made to produce trainers as a cardistry product, and alternative to playing cards. One notable example is “Squids”, an elusive and high end product that was privately developed by Chase Duncan; an early pioneering cardist and magician who consulted for a variety of stage acts, particularly in Las Vegas. In Cardistry, he is widely considered to be one of the most talented and well known figures and is responsible for numerous ubiquitous flourishes and a few that are considered to be extremely difficult to master.

Cardistry-Con is an interactive conference centered around the art of cardistry, where cardists from all over the world can gather and explore the limitless expressive potential of an ordinary deck of playing cards. The event promotes cardistry in an encouraging environment suitable for anyone passionate about the art.

One of the highlights of the annual event is the Cardistry-Con Awards, which includes categories for deck design as well as a technical achievement.

The "beta" Cardistry-Con occurred in 2014 as a subsection of Dan & Dave's Magic Con. In 2015, Magic Con was discontinued and an official Cardistry Con took its place. Since then, Cardistry-Con has been held in Brookyln (2015), Berlin (2016), Los Angeles (2017), Hong Kong (2018), and Portland (2019). The next Cardistry-Con was originally scheduled for mid-2020 in Brussels, Belgium, but was postponed as a result of the coronavirus pandemic.

All content from Kiddle encyclopedia articles (including the article images and facts) can be freely used under Attribution-ShareAlike license, unless stated otherwise. Cite this article:
Cardistry Facts for Kids. Kiddle Encyclopedia.