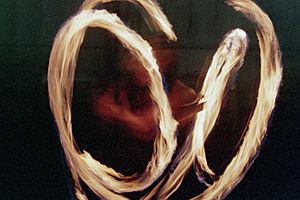 A hobby — performance — sport — traditional Māori dance, flaming poi are among a wide variety of twirling gear in modern use.

Twirling is a form of object manipulation where an object is twirled by one or two hands, the fingers or by other parts of the body. Twirling practice manipulates the object in circular or near circular patterns. It can also be done indirectly by the use of another object or objects as in the case of devil stick manipulation where handsticks are used. Twirling is performed as a hobby, sport, exercise or performance.

Twirling includes a wide variety of practices that use different equipment or props. All props are 'stick' or simulated stick shape and are rotated during the activity. The types of twirling are arranged alphabetically. 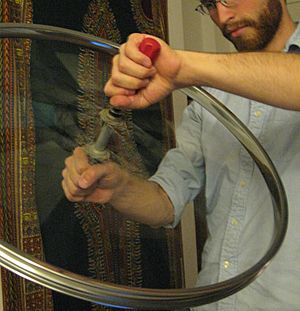 Astrowheeling is a form of twirling used as personal exercise for improving dexterity, focus and balance.

By using a heavy spinning wheel with handles, astrowheeling combines the aesthetics of twirling and the resistance of spinning wheels into a form of practical exercise. It was inspired by ancient practices that manipulate the rotational inertia of spinning objects in order to develop balance, focus, and control. The current trend of astrowheeling, which uses "bike-like" wheels, was popularized in the 1980s in North America. 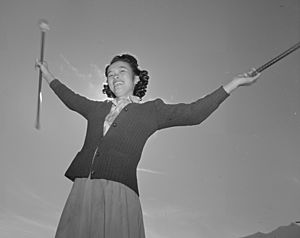 Baton twirling has expanded beyond parades and is now more comparable to rhythmic gymnastics (see below). The sport is popular in many countries including the United States, Japan, Spain, France, Italy, the Netherlands and Canada. Many countries compete each year at the World Baton Twirling Championships.

The sport of baton twirling is a relatively new discipline that has evolved through many dimensions.

The distinguishing fundamental characteristics are:

Handling of the baton instrument to create visual images, pictures and patterns, executed with dexterity, smoothness, fluidity, and speed, both close in and around the body and by releasing the baton into the air.

Expression of the body through dance and movement to create a demonstration of strength, flexibility, physical fitness, beauty, aesthetics, and harmony in coordination with the manipulation of the baton. The incorporation of gymnastic movements adapted to baton twirling to create additional elements of risk and excitement.

The discipline requires the simultaneous blending of these fundamental characteristics all set to music, utilizing time and space to display both technical merit and artistic expression in creating a total package for the viewer’s eye. Baton twirling is an entertaining and exciting sport to watch. The intricate timing and precision required to perform these feats is difficult. Baton twirling requires complete concentration and coordination. It demands top physical conditioning.

Baton twirling encompasses the physical stamina and agility of gymnastics and dance, the beauty of figure skating and ballet, and the technical skill of all these sports combined.

The distinguishing fundamental characteristics are:

Handling of the baton instrument to create visual images, pictures and patterns, executed with dexterity, smoothness, fluidity, and speed, both close in and around the body and by releasing the baton into the air.

Routines for competitive sport baton twirling are designed for athletes of novice through elite stages of development, experience and ability. Individual competitive events utilize one-baton, two-baton, or three-baton to standardized music while Group competitive events are performed with members twirling together with precision and unison. Also there are pair and group events which include Freestyle Pairs and Freestyle Team at the highest level. Groups utilize their own pre-recorded music.

One of the highest honors in twirling is winning "WBTF Gold Medalist."

Baton twirling started in Eastern Europe and Asia. It is thought it started at dance festivals where the goers used knives, guns, torches and sticks to twirl with and toss. The "activity" progressed into the armies of some countries which twirled with rifles during marches. When the army was parading, they added a rifle twirler to the front of the marchers. The rifle was then switched for a "mace". The mace was much larger than the batons of today and imbalanced. They are still used by some marching bands at parades nowadays. The mace barer or "drum major" twirled the baton whilst leading the army or band. This was very popular in the United States following World War II with the American Legion Bands and the Fireman’s Bands. The maces were altered for easier twirling and now resemble the batons. They were given smaller ends of light rubber, made from hollow light metal and balanced to give accuracy to the twirler. It is thought it was the involvement of females ("drum majorettes") and the progression of twirling that resulted in the lightening and balancing of the baton. The sport came to North America when Major Millsap’s created baton twirling when he established Millsap's College in the United States in Mississippi after the Civil War.

While many member countries have their own national organizations, the World Baton Twirling Federation governs the sport of baton twirling on an international level.

A combination of pen spinning tricks.

Pen spinning — using one's fingers to manipulate an ordinary inexpensive writing-pen — can be performed anywhere. Sometimes classified as a form of contact juggling, pen spinning may also include tossing and catching of the pen.

Called "rōnin mawashi" in Japan, where it is popular among the per-collegiate community, pen twirling has its stars, as does any other performance or skill. Accomplished masters of the art form that are well known — at least among those who follow the sport — have developed a reputation for creation of certain signature 'moves'. David Weis is credited with creating numerous 'back' style moves, such as the "BackAround". Hideaki Kondoh is generally credited with giving the pen trick "Sonic" its name, because of the way the pen would blur in his fingers.

Penspinning only recently saw a rapid increase in recognition due to the emergence of internet media websites such as YouTube. From 2006 onwards, the art of Penspinning has developed subcultures in many countries of the world including the Asiatic-regions and Europe (France, Germany and Poland).

Poi is a form of juggling, dance or performance art, accomplished using balls, or various other weights, on ropes or chains — held in each hand, and swung in various circular patterns, similar to club-twirling. It was originally practiced by the Māori people of New Zealand (the word poi means "ball").

Combining elements of ballet, gymnastics, theatrical dance, and apparatus manipulation, Rhythmic Gymnastics, once largely considered a sport for women and girls, is growing in popularity among men as well. The Japanese's version of Men's rhythmic gymnastics includes tumbling and is performed on a spring floor. Men compete in four types of apparatus: rope, stick, double rings and clubs. Groups do not use any apparatus. Japan hosted the first men's world championships in 2003.

Rhythmic gymnastics as a sport began in the 1940s in the former Soviet Union. It was there that for the first time, the spirit of sports was combined with the sensuous art of classical ballet. (To Isadora Duncan, we credit the famous rebellion against the dogma of classical ballet and the shift toward the creation of a new discipline that would blend art and sport.) Recognized in 1961 as 'modern gymnastics', later 'rhythmic sportive gymnastics', rhythmic gymnastics experienced its first World Championships for individual gymnasts in 1963 in Budapest.

Today, Rhythmic gymnastics as a sport continues on, and hobbyists have adopted rhythmic gymnastics props such as the women's Ball, Clubs, Hoop, Ribbon, and Rope, plus the stick and rings of men's gymnastics, as exercise and recreational gear. These props have found their way into the modern 'juggling and dexterity play community' where they are used to perform tricks and maneuvers for fun fitness, and flexibility.

"Twirling", "sticking," and "stick juggling" are all common terms for using the twirling prop known as devil sticks, flower sticks, or various other names. A set of devil sticks is made up of one baton and two control sticks.

In use the central stick, the baton, is pushed, lifted and caressed by the two control sticks causing the stick to flip, wobble, spin, and fly through various maneuvers or tricks.

Juggling sticks similar to the modern variants have continuously evolved as they were passed down through the centuries. Apparently originating in Africa earlier than 3000 BCE, "devil sticks" may have followed the Silk Road, from Cairo to China, and have been used in Europe since the Renaissance.

In some forms of Morris dancing, a stick is twirled in one hand during a dance. For example, in stick dances from Brackley in the Cotswold tradition, each dancer twirls one or two sticks throughout the dance.

Staff twirling is the art or sport of skillfully manipulating a staff, such as a quarterstaff, bo, or other long length of wood, metal, or plastic as recreation, sport, or as a performance.

In the martial art of bojutsu, a bo is used as a weapon, increasing the force delivered in a strike, through leverage. Bojitsu kata—detailed patterns of movements practiced to perfect one's form—are also used in many traditional Japanese arts, such as kabuki. Some of these kata, are very flowing and pleasant to experience, both as the one executing the movement, and as a spectator.

Staff twirling has enjoyed recent growth in the dexterity play, juggling and fire dancing communities, in part due to the influence of martial arts, and in part due to increasing popularity of adult play as recreation.

The figure-eight twirl can be used as a demonstration that a double rotation is a loop in rotation space that can be shrunk to a point.

All content from Kiddle encyclopedia articles (including the article images and facts) can be freely used under Attribution-ShareAlike license, unless stated otherwise. Cite this article:
Twirling Facts for Kids. Kiddle Encyclopedia.