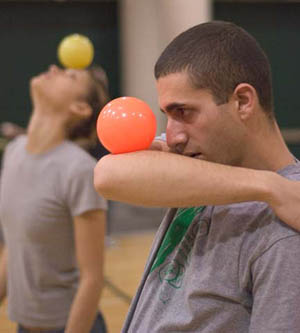 An example of body rolling.

Contact juggling is a form of object manipulation that focuses on the movement of objects such as balls in contact with the body. Although often used in conjunction with "toss juggling", it differs in that it involves the rolling of one or more objects without releasing them into the air.

Body rolling means manipulating one or more props (usually balls) around the hands, arms, and other parts of the body. Balance is required to hold the ball in various positions of control. This includes tricks such as headrolling and the butterfly, the trick of rolling the ball from the palm to the back of the hand via the fingertips.

The headroll is a trick involving rolling an object or prop, typically a ball, around on the juggler's head. The most commonly performed version is rolling a ball from temple to temple, across the forehead. At some points during the trick, the object may be balanced in place at a certain location on the head. Points where the prop may be balanced (also known as placement, or trap) include: the temple, the center of the forehead, the back of the neck, the eye socket, the mouth, and the most difficult; the top of the head.

Palm spinning means manipulating one or more balls in the open hand so that at least one ball is in motion. Balls may be in both hands or transferred between hands to form graceful and fluid patterns, including rotating a pyramid made of four or five balls in one hand.

Isolation refers to the manipulation of a ball so that it appears to be suspended in place. Similar to sleight-of-hand techniques in magic or fixed-point mime techniques; the performers exploit the clear surface of the ball to hide any noticeable rotation, creating the effect that the ball is still while the performer moves around the ball.

There are various forms of contact balls such as;

All content from Kiddle encyclopedia articles (including the article images and facts) can be freely used under Attribution-ShareAlike license, unless stated otherwise. Cite this article:
Contact juggling Facts for Kids. Kiddle Encyclopedia.