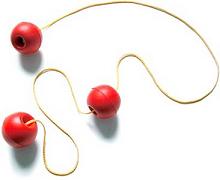 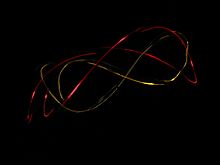 A light trail from an Astrojax Saturn

Roughly, Astrojax play is a cross between juggling, yo-yo, and lasso. A wide variety of tricks and maneuvers can be performed with it. The basic orbits are vertical orbits, horizontal orbits and a figure-eight (butterfly) pattern.

Astrojax has won a number of toy awards, has been taken into outer space by NASA for their "Toys in Space" program.

There are three Astrojax categories in the Guinness Book of World Records database.

1. Horizontal Orbit: One of the balls is held in the user's hand, the other two maintain horizontal orbits underneath. The two spinning balls counterbalance each other. This is maintained by small movements of the top ball to keep the orbits from slowing. The trick can be started by holding both the top and bottom balls (the top one directly below the bottom one), and spinning the middle ball. Then releasing the bottom ball creates a horizontal orbit.

2. Vertical Orbit: Similar to the horizontal orbit, but with the bottom and middle balls orbiting perpendicular to the ground. By tugging slightly on the ball in hand, the orbit continues however long the user desires. This is the starting movement for both tricks.

3. Butterfly: Starting with a vertical orbit the top hand is moved left and right quickly, in time with the rotation of the bottom ball. This causes the balls to move in a shape resembling a helix.

4. Switch: During a vertical orbit the top ball is released and the bottom ball is caught. The orbit now continues with their positions reversed. This trick can be performed repeatedly to add to the effect.

5. Venus: The bottom ball of a vertical orbit is pulled hard so that it travels over the users arm, followed by the middle ball. This trick can also be repeated for added effect.

6. Thriller or "Eskimo Yo-Yo": Hold the middle ball in one hand and start swinging the right ball around it. Then, throw the left ball around and around and watch them swing.

All content from Kiddle encyclopedia articles (including the article images and facts) can be freely used under Attribution-ShareAlike license, unless stated otherwise. Cite this article:
Astrojax Facts for Kids. Kiddle Encyclopedia.