Oxford is a town in Oak Grove Township, Benton County, Indiana. The population was 1,162 at the 2010 census. It is part of the Lafayette, Indiana, Metropolitan Statistical Area.

Oxford was Benton County's first town. Commissioners appointed by the Indiana General Assembly selected the location in May 1843 to be the site of the county seat on land donated by Henry W. Ellsworth and David Atkinson. It was first called Milroy in honor of Samuel Milroy, one of the commissioners, but a town in Rush County already bore that name. In October 1843 the commissioners changed it to Hartford, after Hartford, Connecticut (the home of Ellsworth and Watkins), but they discovered this name was also already being used in Indiana, so in December Judge David J. McConnell awarded the town its present name. 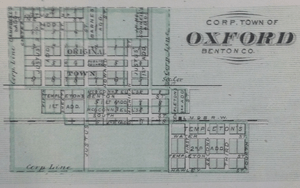 Lots went up for sale at this time, with buyers allowed to pay for the lots in three installments over 18 months. The first building erected in Oxford was a two-story, wooden frame courthouse, designed and built by Francis Boynton, and the second was a hotel, built by Henry L. Ellsworth and operated by James L. Hatton. The first home was that of Aaron Wood, who also ran a small store that supplied groceries, beer and whiskey.

Many additions and expansions to the town were made over subsequent decades, adding several streets and more than 300 lots. On July 7, 1869, a vote was held to determine if Oxford should be incorporated, and passed with 41 in favor and 28 against. The town was dealt a blow, however, when in 1874 it lost its status as county seat to more centrally-located Fowler, 9 miles to the north.

Standardbred horse Dan Patch is arguably the town's best-known native, and was foaled in an Oxford barn on April 29, 1896. The horse gained celebrity status for setting world speed records that remained unbroken until 1960. A 1949 film, The Great Dan Patch, dramatized the horse's origins in Oxford and rise to fame. He continues to be honored at the town's annual Dan Patch Days festival.

The David S. Heath House and Presbyterian Church Building are listed on the National Register of Historic Places.

Additional significant historic properties include the Messner Building and the Masonic Building.

Oxford is located in Oak Grove Township in the south part of the county. U.S. Route 52 passes within two miles of the town to the northeast; State Road 352 passes through the town and connects with US 52. State Road 55 also passes through downtown Oxford. The area occupied by the town is mostly open farmland that slopes gently southeast toward Big Pine Creek.

There were 479 households of which 32.6% had children under the age of 18 living with them, 47.8% were married couples living together, 10.4% had a female householder with no husband present, 5.6% had a male householder with no wife present, and 36.1% were non-families. 30.7% of all households were made up of individuals and 15.1% had someone living alone who was 65 years of age or older. The average household size was 2.43 and the average family size was 3.04.

There were 485 households out of which 34.6% had children under the age of 18 living with them, 53.2% were married couples living together, 10.9% had a female householder with no husband present, and 30.5% were non-families. 24.9% of all households were made up of individuals and 15.1% had someone living alone who was 65 years of age or older. The average household size was 2.54 and the average family size was 3.01.

All content from Kiddle encyclopedia articles (including the article images and facts) can be freely used under Attribution-ShareAlike license, unless stated otherwise. Cite this article:
Oxford, Indiana Facts for Kids. Kiddle Encyclopedia.