Ambia is a town in Hickory Grove Township, Benton County, Indiana, United States. The population was 239 at the 2010 census. It is part of the Lafayette, Indiana Metropolitan Statistical Area.

Ambia was laid out by Ezekiel M. Talbot and his wife Marietta on February 22, 1875, and named for their daughter Ambia Talbot. (The couple had two years earlier planned the nearby town of Talbot.) Its first building was a house erected by James C. Pugh which was soon joined by a grain elevator, general store and blacksmith. A drug store, hardware store, hotel, physician and a variety of other establishments followed.

Ambia was a stop on the Lafayette, Muncie and Bloomington Railroad (later the Lake Erie and Western) which ran between Lafayette and Hoopeston. The Wabash Railway Company, which built a stretch of the LM&B through Illinois, originally wanted to construct a railway switch at a site known as Weaver City, a small town just west of Ambia in Vermilion County, Illinois; the owner of the property, however, refused to grant land for it. In response, the railway officials sent a force of men without notice to move the station house from Weaver City half a mile east across the state border, which they did on the Sunday morning of March 10, 1873. The town's businesses and residents followed and Weaver City faded from existence while Ambia sprang up near the station's new site. 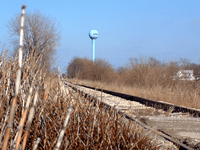 Ambia from the west.

There were 78 households, of which 50.0% had children under the age of 18 living with them, 66.7% were married couples living together, 11.5% had a female householder with no husband present, 2.6% had a male householder with no wife present, and 19.2% were non-families. 17.9% of all households were made up of individuals, and 8.9% had someone living alone who was 65 years of age or older. The average household size was 3.06 and the average family size was 3.49.

All content from Kiddle encyclopedia articles (including the article images and facts) can be freely used under Attribution-ShareAlike license, unless stated otherwise. Cite this article:
Ambia, Indiana Facts for Kids. Kiddle Encyclopedia.