Dunnington is a small unincorporated community in Parish Grove Township, Benton County, in the U.S. state of Indiana.

Named for Capt. James Dunn, it stands about one and a half miles west of its smaller sister town, Dunn. A post office was established at Dunnington in 1888, and was discontinued in 1903. In the early 20th century it supported a Catholic church and school, a general store, a Forresters lodge and about half a dozen residences (an estimate similar to the town's current size). St. Mary's Catholic Church, established in the late 19th century, was renovated in the early 1950s and was home to St. Mary's Catholic School, which closed in the late 1960s. 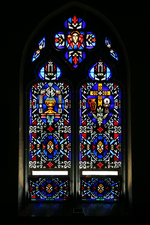 All content from Kiddle encyclopedia articles (including the article images and facts) can be freely used under Attribution-ShareAlike license, unless stated otherwise. Cite this article:
Dunnington, Indiana Facts for Kids. Kiddle Encyclopedia.