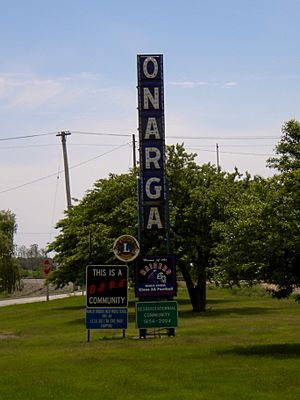 Onarga has a continental climate, with four distinct seasons. Onarga experiences cold winters, with frequent snowfall and temperatures that sometimes plunge to as low as -10 °F to -20 °F. Average late-December to late-February high temperatures average in the mid to upper 30s. Springs are generally mild, and often rainy, windy, and cloudy with high temperatures averaging in the 50s (late-March) to 80s (early-June). Summers are hot and humid, generally with brief periods of intense thunderstorms and rainfall. Average summer high temperatures are in the mid to upper 80s, with highs in the lower 90s also common. Falls are crisp and drier with first killing frosts generally arriving in mid to late-October. Onarga's typical summer weather is highly conducive to growing corn and soybeans, which dominate the rural landscape. On average, 40.44 inches of precipitation per year fall at Onarga.

Onarga has a rich and celebrated history for a small town. It was originally laid out in the mid-19th century alongside the development of the railroad from Chicago. Because of its close proximity to Spring Creek, Onarga was one of the first settled areas of Iroquois County. The town grew rapidly but the population began to level off by the mid-20th century and now maintains fairly minimal population growth. Onarga is often associated with its tree and shrub nurseries that have been in business for over 100 years, earning Onarga the nickname, "The Nursery Capital of the Midwest." Many fields surrounding the town bear rows of trees and bushes rather than corn and soybeans, which are otherwise ubiquitous throughout the region. The prosperous nursery businesses have led to a great amount of ethnic diversity in Onarga, as many Mexican and Mexican-American migrant workers have chosen to maintain roots in the community.

Onarga celebrated its sesquicentennial with a nearly week-long festival in the summer of 2004, which included social events and a strong focus on the history of the community.

Onarga has a golf course, several restaurants, and Lake Arrowhead. The only movie theater in Iroquois County is also in Onarga.

There were 475 households out of which 40.2% had children under the age of 18 living with them, 56.2% were married couples living together, 10.7% had a female householder with no husband present, and 27.8% were non-families. 24.8% of all households were made up of individuals and 15.2% had someone living alone who was 65 years of age or older. The average household size was 2.87 and the average family size was 3.42.

All content from Kiddle encyclopedia articles (including the article images and facts) can be freely used under Attribution-ShareAlike license, unless stated otherwise. Cite this article:
Onarga, Illinois Facts for Kids. Kiddle Encyclopedia.