Paxton is a city in Ford County, Illinois, United States. The population was 4,473 at the 2010 census. It is the county seat of Ford County.

The town was initially named Prairie City in the late 1840s, then Prospect City by an Illinois Central Railroad official in 1855. However, as Wilbur W. Sauer says that residents noted the town was "all prospect and no city." In 1859, it was renamed for Sir Joseph Paxton, architect of the Crystal Palace, who was a major shareholder in the Illinois Central Railroad, which in 1856 was the longest span of railroad in the world (Chicago to Cairo). It was rumored that Paxton was interested in organizing an English settlement in Illinois. The colony never materialized, but the town kept the name. Founded in 1859, Paxton celebrated its sesquicentennial in 2009.

Augustana College was located in Paxton from 1863–1875, aided by a community effort led by recent Swedish immigrants to fund educational and cultural opportunities for citizens.

An early public high school was established in 1872; it served the surrounding area for the next several decades, culminating in the formation of a community high school district in May 1920. The local school's mascot was the Paxton Mustangs until consolidation with the Buckley-Loda Rockets district in 1990 formed the current Paxton-Buckley-Loda School District, known as the PBL Panthers. The school is a member of the IESA and IHSA for interscholastic sports and activities.

The Ford County Courthouse in Paxton was built in 1906, and boasts many murals painted by the Works Progress Administration during the 1930s.

On June 22, 1919, former President William Howard Taft visited Paxton while on his way to Champaign. After disembarking from a long train ride, Taft delivered a speech in the Pells Park Pavilion in favor of U.S. entry into the newly formed League of Nations. Taft's appearance is a testament to the Paxton Chautauqua, which was held in Pells Park from 1905-1930, attracting musicians, speakers and entertainment from all over the United States. Taft is one of four U.S. Presidents to visit Ford County, joining William McKinley (Gibson City in 1897), Richard Nixon (Melvin as vice president in 1957), and Gerald Ford (Melvin in 1974).

From 1865-2007, the Paxton Daily Record was published in Paxton, making the paper one of the longest-running daily newspapers of its size in the state of Illinois. Today, the Paxton Weekly Record is owned by the Champaign News-Gazette and continues to publish local news, sports, and other events.

Due to Paxton having the highest elevation points in the area, the Illinois Central Railroad dug out ground so that the railroad could move at the same elevation, but underneath the city of Paxton. When the railroad was cut (around the 1920s), several bridges were built across the railroad to connect the east and west sides of Paxton. Presently, there are three vehicular bridges, which are located at Holmes Street, Pells Street and Patton Street. There is also a pedestrian bridge at Orleans Street. The vehicular bridges at Pine Street and Center Street and the long-abandoned pedestrian bridge at Franklin Street were removed in the spring of 2010.

The town also hosts the Historic Brick Water Tower & Ford County Historical Society Museum, which opened on July 4, 2007. The 80-foot (24 m) tall brick water tower was built in 1887 and is listed on the National Register of Historic Places. The Paxton Foundation, a local historical preservation group, is currently restoring the Old Ford County Jail and Sheriff's Residence, built in 1871. Located on West State Street adjacent to the Courthouse, it will be turned into a museum. Another local building on the National Register of Historic Places is the Paxton Carnegie Library, which was built in 1903.

The community has many homes built in the late 19th century, some of which are now part of an historic homes walking tour. Many of the home owners have won awards from various preservation and restoration societies for their efforts in maintaining the architectural heritage of these important landmarks. The Paxton Area Chamber of Commerce and PRIDE in Paxton, a member of the Illinois Main Street Program, currently promote local businesses and events in the historic downtown district. 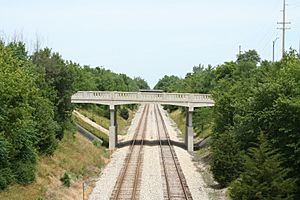 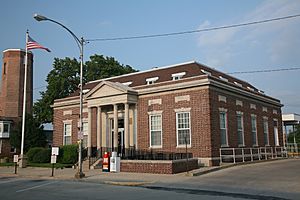 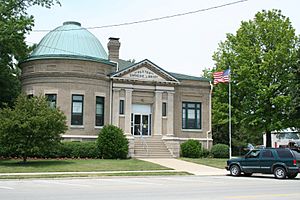 There were 1,776 households out of which 33.2% had children under the age of 18 living with them, 54.7% were married couples living together, 8.8% had a female householder with no husband present, and 32.5% were non-families. 29.7% of all households were made up of individuals and 14.5% had someone living alone who was 65 years of age or older. The average household size was 2.45 and the average family size was 3.02.

The education level of the population age 25 and older in Paxton is as follows:

All content from Kiddle encyclopedia articles (including the article images and facts) can be freely used under Attribution-ShareAlike license, unless stated otherwise. Cite this article:
Paxton, Illinois Facts for Kids. Kiddle Encyclopedia.